It’s been a long time since we had a rooster. After Red the Randy Rooster met his fate with his second round bout with Foxy Loxy a couple of years back we just never replaced him. Late Sunday night Ma Pickle’s Home for Wayward Hens opened it’s door (well wire gate) to welcome a male into the coop. A young Wyandotte rooster is now settling in among the hens. 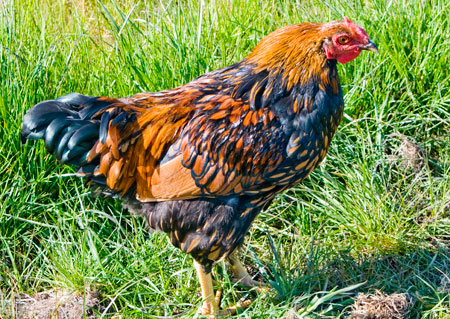 He is just gorgeous. So regal looking and such gorgeous colours, his black feathers have a real green sheen to them that you can’t see in the photo. He should grow into one spunky looking rooster!

He’s having a few issues settling in. He’s being hassled a little by our old Isa Hen who thinks she is a rooster. She simply refuses to acknowledge that he is a boy chook and she, as a girl chook, has no place mounting the other hens and bossing him around. I mean I am all for women’s rights and all that, but it just doesn’t work like that in the chook world. The Rooster is still young, so I think it will take him a little while to assert his dominance over all the hens, but I think he’ll manage. Hopefully one day he’ll be the proud father of several little chicks!

Right now though, he has made friends with Cupcake (the limping bantam, though her limp is almost gone), which is good. To have the rooster on your side is a very good thing if you are the smallest hen at the bottom of the pile. He’s not crowing yet, but he is trying very hard. When he attempts a crow he sounds a little like a strangled cat, but once he nails it I think he’ll make sure everyone knows he is top dog… er.. I mean chook.

So names…. We are attempting to implement a new naming rule – if you buy the chook you buy naming rights. Since my mother-in-law was the one who found this lovely Rooster at auction on the weekend, she got first dibs on names and has called him Sultan. I tried to convince the girls what a good name that was, Sultan… Sully for short but they are having nothing of it. Izzy calls him Arty and Zoe calls him Handsome King. So it seems his name is Sultan Arty Handsome King – Sahk??

We’ve still not decided on names for the other new arrivals. So far the suggestions are –
For the two Big Reds –
Bluey and Big Red
Agnes and Bertha

So far the twinadoes have no approved of any of these names, but I quite like Agnes and Bertha and we’ve started to call the other two ‘Fluff ‘ead 1 and Fluff ‘ead 2’ …. so definitely keep the name suggestions coming!

Home » A Male in our Midst