My boy doesn’t say much. He is the strong silent type…. Actually he isn’t silent at all really. He grunts and shrieks and screams and moans and clicks and snorts and moos. 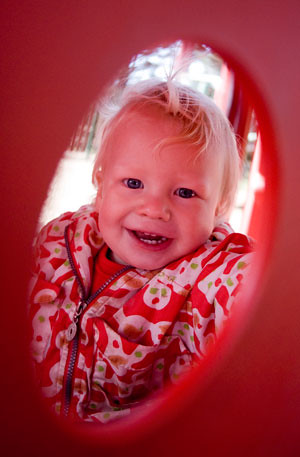 Really, it’s not so strange when you think about it. His first ‘word’ was ‘Duck’, closely followed by ‘quack’. Now I say ‘word‘ in inverted commas because he was about 8 months old when he first started making a noise that sounded like ‘duck’ and only a few weeks later, encouraged by everyone in our family, he started to quack, but they weren’t ‘words’ really… they were just sounds that sort of, kind of, might have sounded like a word. Still… we thought he was a genius, of course.

Back to the mooing though…

So his first trick was ‘Duck says?’….”quack” and um… that was his only trick for quite some time. Recently though, he stared to moo…. and it is a moo only a mother could love. It’s a high pitched girly kind of mooooooooooooooo…. but it is definitely a moo. He’ll point to a cow (and we have a whole paddock full of them next door) and moo, he’ll pick up a toy cow and moo. Ask him what a cow says and you get “mooooooo”…. er.. ask him what a horse says and you’ll also get ‘mooooo’. Ask him what an elephant says and yep, you guessed it ‘mooooo’…

His sisters have been working with him a bit… bringing out all of the plastic animals and drilling him on what noise each of them makes. He’s picked up ‘Chook says?’ – “chook chook'” (which is what ours say, rather than bok bok that is) and he’s pretty much got that pig says – “oink” though it is kind of a snuffly snort but that is good enough for me.

Dog says…. “fffffffffff*blow air make the sound of an f*fffffff”

The girls roll about on the floor laughing at him, and try hard to get him to say ‘woof’ but still… a week later, with a lot of hard work and encouragement on their part, the damn dog still says “fffffffffff”. It is so damn cute (almost as cute as when he winks with his whole entire face!) that I think all dogs should start saying “fffffffffffff” just so he never changes it!

Apart from what I think might be a “dat” (that) which has begun to accompany his frenzied pointing and grunting in the last 24 hours, the animal noises are the sole extent of his language skills. By the same age (16 months) the Twindoes were chatting up a storm, and for children who were at high risk for language delays (being born prem and being twins) they started talking early and they have yet to shut up. Of course Muski the Menace is his own man, a totally different kettle of fish in almost every way.

He simply doesn’t bother with talking, when he can grunt and point and chuck a wobbly and Mum and Dad and his two sisters will all come running and turn themselves inside out to figure out exactly what he wants. It must be a great show, far too good to muck up by actually speaking! One day, I suspect, he’ll surprise us all by suddenly talking in complete perfect sentences like he’s being doing it all along… till then I will ask what a dog says every chance I get cause “ffffffffffff” is just too good to miss out on!