It’s important for a child’s development that they crawl before they walk. Not only for physical development but the cross patterning action (opposite hand to foot) used in traditional crawling is important for brain development. If a child skips crawling and goes straight to walking, or if they crawl in a non-traditional way (bottom scooting etc) it can sometimes cause problems later on with things like co-ordination, reading and writing. 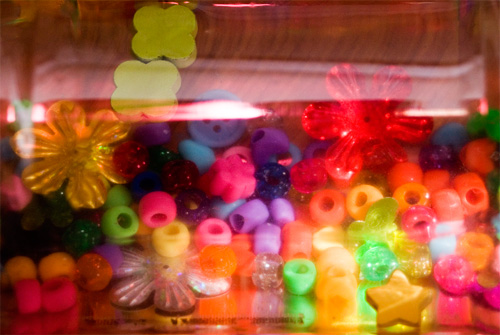 Noey is a commando crawler. He sometimes cross patterns when he commando crawls but sometimes he is all arms and no legs as he slithers across the floor. He’s not the least bit interested in crawling on his hands and knees in the traditional way. The only time he gets on his hands and knees is when he is about to pull himself up on something. At the moment he is pulling up on everything and even attempting to stand on his own, which is fun and exciting, but I really want him to crawl, properly, before he decides to walk.

So this morning, while Noey was sleeping, Morgan and I made him a little surprise. 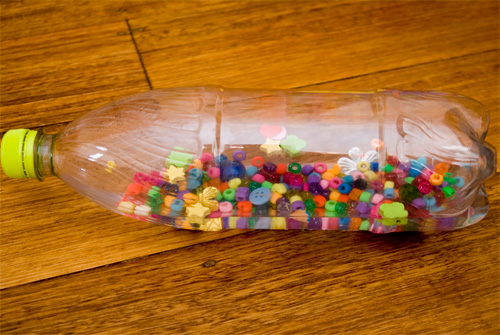 We removed the label form a 1.25 litre PET bottle, rinsed it out then filled it with a little water. We hunted through the craft cupboard to find various brightly coloured sparkly things that would fit into the bottle. We just happened to have a huge collected of sparkly pony beads, some other coloured beads, some large sequins and a few foam shapes, a good variety of things that would float and sink. Then with glued the lid on tight and waited for Noey to wake up. 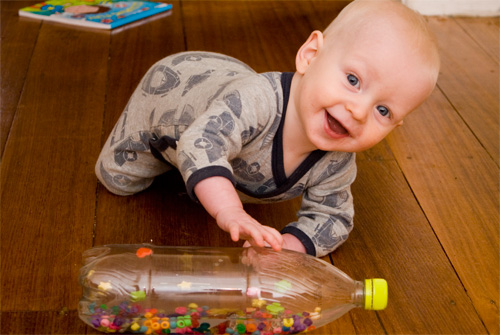 Ok, so rolling the sparkly bottle around the floor and having Noey chase didn’t exactly get him to crawl on his hands and knees the whole time, and considering how fast he can commando crawl it probably never will. But it was lots of fun to make and both boys had lots of fun chasing it around the floor and shaking it up. So the two minutes it took to make it was time well spent.

So what are you playing today? Pop on over to Childhood101’s We Play link up to see lots more inspirational ideas.