So since my last post was a blatant attempt to make my poor sister-in-law feel guilty about being late the other day, I thought I should, at the very least restore her reputation.

Despite the photo, Izzy was fine when the promised Aunty did arrive and totally forgot that a minute before she was mad as anything at her! Of course it did help that I had promised to take them into town to but whatever they wanted from the bakery when she did arrive! (I must remember never to make such a broad promise as that in the future as I had to watch my pure, pristine, non sugar eating children consume the most sugared, artificially coloured cake in the whole shop, complete with blue jelly beans! eek!) So with all of us sugared up some, and some of us sugared up a lot we did a quick round of grocery shopping and came home to cook dinner.

The fabulous Aunty then took the girls out to the back fence to visit with the neighbors horses which their mean mother never takes them to do (the time the horses are fed is right when I need to start dinner… and it’s too damn cold these days… and well.. that is a job I save for late Aunties to win back good favour!), then we ate, bathed and GOT PRESENTS!!! Lateness was well and truly forgotten by that stage as they put on their nifty new summer PJs over the top of the flannel ones, fought over the tiny pink shoes and insisted of taking the cats to bed with them.

Once again Aunty Sarbah is restored to the high status in this house that her previous absence had eroded. Once again she rates second on Izzy’s list of who she loves, only superseded by Daddy!

My girls are lucky to have a plethora (love that word!) of wonderful Aunties… some aren’t really related, some are related but aren’t really aunts and some are even great aunties, but all are pretty special. The great Aunties, especially, do VERY well at living up to their title I must say!

Despite the fact that the three great Aunts scared me silly when I first met them (well before they were great aunts I have to say!) either they have mellowed or I have gotten used to them as now they are among my very favorite inlaws! And they do so love the girls…

Aunty Di is the reader of books, I know I am risking my life by posting this photo (Julia just don’t show her!) but it sums up Aunty Di very well… as soon as she sits down my girls climb into her lap and insist on story after story ! 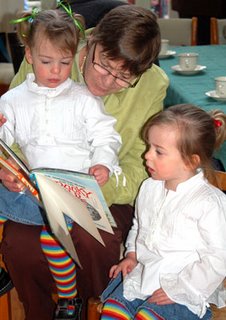 Aunty Sue is the gumboot provider. With incredible intuition two new pairs of gumboots arrived just as the old ones had lost the bears and started to get a bit small. Of course they are not just any old gumboots, they are cow boots and jewel boots (Jewel being another fab Aunty’s dalmation!) and much of the last week or so has seen both girls wandering around the house stark naked… except for the gumboots!

Aunty Jenny is the sewer of all things cool! Of late the girls have demanded to take one of the small rag dolls jenny gave them for Christmas to bed…. I usually find them about a half our later, asleep with doll in one hand and the doll’s clothes in the other! Jenny is also the source of the much lived bear one and bear two who are currently ‘sweeping shhhhhhhh’ in their prams wearing a cloth nappy and cow and butterfly slippers!

So despite my last blog post… Aunties really do rate very highly in this house!

Home » After the guilt trip…