Zoe and Izzy would happily spend these cold winter weekends curled up somewhere warm with a book.

They are at that stage where they can read well enough to totally get lost in the magic of a story. They get drawn in and disappear into the fantasy world for hours on end, late into the night if I let them. And while I pay for it when getting up on school mornings, I love that they love to read so much that I usually let them read for as long and as late as they like.

They have a voracious appetite for books, but at the same time they are quite picky. They will bring home several books each from the school library, but unless it really grabs them in the first few pages they’ll happily ditch that book and move on to the next one.

Here are a few books the girls have been enjoying lately –

The Secret Garden -Frances Hodgson Burnet
This book was full of difficult language and even I had trouble making sense of some of the conversations where a Yorkshire accent was written in text, but the magic of this story had Zoe hook line and sinker and she battled through the hard bits and was to proud to have read this long book. In celebration we borrowed the DVD, though of course, the book was better!

Geronimo Stilton
Many wise friends have recommended this series before, but each time I suggested it to the girls they turned up their noses. Of course when Izzy’s teacher suggested she give them a try she eagerly did and discovered that she loves them. Really fun and exciting stories with lots of cool pictures scattered through the text. Given the chance Izzy reads these books from cover to cover in around a day.

The Red Wind – Isobelle Carmody
This is the first book in the new junior reader series by Isobelle Carmody. We are big fans of her Little Fur books and I enjoy lots of her teenage fiction (and I know, I’m not a teenager) and this book was just as fabulous. We read this one together, because none of us wanted to miss anything! We are eagerly awaiting the release of the next book in the series. We NEED to know what happens to Billy and Zluty next!

Arkie Sparkle – Petra James
My girls were sent copies of the first book in this new series, Arkie Sparkle, Treasure Hunter – Code Crimson and they really enjoyed it. The story is about all the things my girls are into… a bit of girl secret agent action combined (in this book) with Egyptian themes (my girls are quite taken by the idea of Cleopatra). The only criticism both girls raised about this book was that there were no boys in it at all, even the dog was a girl! But they are still super keen to read the next book in the series.

Arkie Sparkle: Code Crimson is available at the end of June and is $6.99($AU RRP) (ebook version $5.99). The next book in this seven part series, Time Trap, is due for release in August.

This competition is now closed – the lucky winners are Jane, Maria, Debbie, Margaret and Brenda. 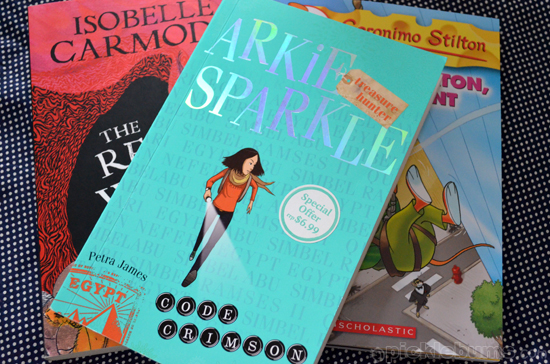 Thanks to Pan MacMillian I have five copies of Arkie Sparkle: Code Crimson to give away.

To enter, leave a comment on this post and tell me about your favourite childhood memory of reading. The five sweetest, funniest or most interesting comments will win a copy of the book.

To enter you must be an Australian resident and provide a valid email address. Entries are limited to one per household.
Entries close midday AEST Saturday June 16th 2012, the winners will be contacted by email and announced on this post. The winners must contact me within 5 days or the prize will be re-drawn. The winners agree to have their postal address and details passed on to Pan Macmillan Publishers who will send out the prizes.

{disclosure : We were given two copies of Arkie Sparkle:Code Crimson to read and review. I was not compensated in any other way for this post. The opinions and ideas expressed in this post are purely my own, or more correctly, those of my girls.}