That boy, you know, the one that I worried may never talk, that boy just never shuts up! 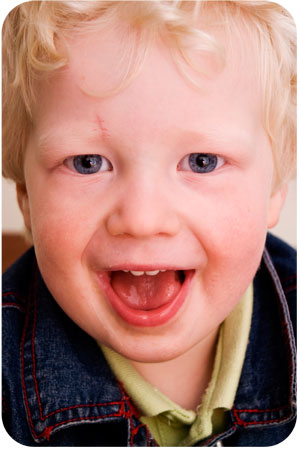 He’s all about the words. His amazing, incredibly funny, words!

He talks and talks, all be it with that odd toddler accent. It’s as though he is newly arrived in this country and just beginning to get a hold of the English language. His accent is thick and often hard to understand, but totally adorable and good for a bit of a giggle!

He can’t say ‘R’, so he and his Japanese Aunt reading the ‘Red Robot’ book the other night made us all smile.

We’ve been trying to teach him to say “Argh I’m a pirate” to go with his very piratical scar over his eye, but it comes out as “Argh I’m a Pilot” which isn’t quite the same thing!

He switches F for S in some words. He told me today that he wanted to have “fimming lessons” too and he often tells you long elaborate stories about ‘fikey fiders’ and ask for ‘frinkles’ on his bread.

He refers to Izzy as “Ishy” and strangely when talking to him Izzy says “Ishy” too.

I just totally omits Y from the beginning of any word, causing a lot of confusion.

He parrots his sisters “but muuuuum” like a seasoned five year old filled with ‘I’m-ready-for-school-now-attitude’.

His sentences are long and complex, filled with lots of describing words and a million conjunctions. “It only laining a little bit so I go outside and find big and little chicken eggs and play sandpit and dig with dinosaurs and go on twampoline?”

He never ever takes no for an answer, ever. Though he uses the word No on countless occasions in countless variations, from a simple no to a more complex “I will not do that!”.

He’s cottoned on to the joys of nick names and will add a new one to his list of names at least once a day. “I Morgan booger!”

He says most things with a wicked grin or a pout with fully featured eyebrows.

You gotta love a bit of ‘boy talk’.