His big sisters put the idea into his head… he wanted a car cake.

Oh man… a car cake!? How on earth was I going to make a car cake?

I headed for trusty google and found a few ideas and options. An easy version involved a race track and matchbox cars, but at that stage we didn’t own any (now we own about 50!) so I began dreaming ideas for a cake, shaped like a car. 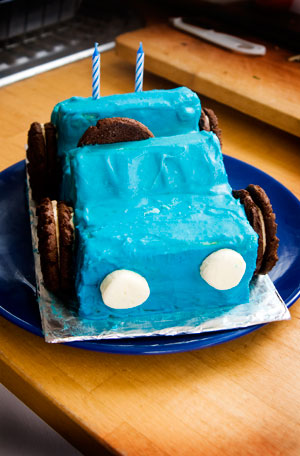 I cheated a little… I bought the sponge cake from the supermarket. At $4 for a two layered sponge I couldn’t go past it, not with cup cakes to cook for my niece and a million other things to do. At least I knew the cake part wouldn’t be a disaster… the decorating part I wasn’t so sure about.

I chopped off one side of the double layer sponge to get a basic rectangle shape for the car, then suddenly decided it’d be a convertible. So I just chopped two of the left over bits on an angle and wacked them on top. Wallah!

I glued it all together with jam and cream between all the layers… mmmmmm Then came the icing. I went with cream icing cause I had whipped cream left over… and it had to be “Boo” according to the two year old who pretty much knows his colours. (yep genius child!). I am sure there is some magic trick of coating the cake with something to stop the crumbs getting in the icing, but I didn’t know it, so the icing is a little crummy but turned out ok.

I went with double chocolate ripple biscuits glued together with more cream for the wheels and stuck one up front for a steering wheel too. Marshmallows for head lights and tail lights and it was done.

I’m really pleased with how it turned out and better than that… it tasted great!