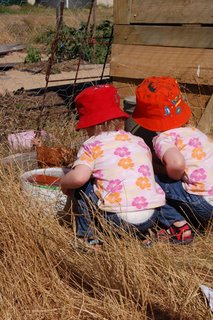 Apparently chickens say “cork cork cork” Or So Bizzy thinks now that we actually own a few!

Yes the chook house was finally finished late Friday (well technically it still isn’t quite done but it is done enough for our new family members!) and Si set out to his mate’s place early Saturday and came back with 6 chooks and rooster.

We have two fully grown chooks, refugees from a battery farm near by that was going out of business. These two old birds are a bit over a year old and should be laying as soon as they settle in… though no one told the scrawny one that and she layed an egg about an hour after arrival! They both have a few feathers missing here and there, especially around their necks, a legacy of the battery cages I am sad to say. They have also been de-beaked which is just horrible! They are however LOVING having space to roam and considering they have spent most of their lives in a tiny cage they haven’t lost any of those chicken instincts and are out there scratching and pecking with the best of them!

The other 4 chooks are only a few weeks old and won’t be at ‘point of lay’ for another few months yet. The rooster is around the same age (though from different parents!) and won’t be ready to do what roosters do for over a year. They were bred free range by a friend Si works with so we know they came from a happy home… though they look awfully scrawny at the moment as they are in the transition from fluffy chick feathers to really proper feather feathers.

I specifically wanted younger chooks and especially a young rooster so that they’d be more friendly and used to the girls. The older two chooks are a tad narky and not so fond of being around us humans – hardly surprising given their previous life experience! They are sorting out the pecking order and trying to decide which one of them is top chook…that is until the rooster grows up and takes over!

But the little ones are very friendly. They crowd around you when you come in the coop and eat out of your hand without any fear. They are very tolerant of the girls already and happily hop on to their laps if they will stay still long enough.

The girls are in love. Totally, utterly and deeply in love to the point of obsession. They can not fathom why they can’t just spend the entire day and night cuddling, petting and chasing chooks. HUGE whaling fits ensue when it is time to leave the chooks to do awfully boring and mundane tasks such as eat or sleep and they constantly ask to ‘cuddle chicken?’.

It was so cool to hear them tell Monnie about the ‘chickens’… that they have eyes and a beak and feathers! And that they can cuddle them and that they say ‘cork cork cork’. I am not sure where the ‘cork cork’ comes from, but the way the girls say it, it sounds a lot like the narky chooks when someone gets them in a corner!

Now we need to name these chickens (yes I am risking naming something that I may some day eat! eeek!)… Anyone with any ideas??? All suggestions will be considered, but please bear in mind that young children will be yelling these names at the top of their lungs on many an occasion….