Most of you who ‘know’ me knew we were going on holidays but for anyone who didn’t know I apologise for the sudden silence. I just didn’t feel it was a smart move to advertise the fact that we were leaving our home unattended for the better part of two weeks while attempting a road trip to Queensland via Dubbo and back via Sydney!

We are back now (obviously) and since I have already done three hundred loads of washing and not even made a dint in the pile I thought it was time to tackle a new challenge.. blogging about the great road trip!

So we left cup day, after a horrendously busy weekend and a crazy day the day before. Several times I really thought we wouldn’t make it, but the world was kind and we managed to all be in the car and down the drive way by a bit after 7am.. miracle! More miracles – the girls did really really REALLY well that first day in the car and we managed to make it all the way to Dubbo in a day… a little over 800kms. We put up the tent for the first time in a really nice caravan park and attempted to get the girls to sleep for the first night in the tent… didn’t go too badly all things considered.

The next day we got up with the birds (a trend that was to continue almost the whole trip) and headed to Dubbo Zoo. Drove around the zoo for the day and the girls fell in love with the ‘Torticles‘ – the huge Galapagos Tortoises and the ‘Rotters’ – the Asian Otters.

The next day we drove a short trip to Moree, a town up the top of NSW that has natural hot springs. The caravan park was geriatrics-ville and the camping facilities left a lot to be desired but they had four different hot springs swimming pools… three at over 30 degrees.. so that was fun.

Then it was our last big drive up to Caloundra through some really pretty rain forest hinterland… saw so many little green valleys with amazing old houses that I could have called home at the drop of a hat! We got into Caloundra a bit early so headed down to the beach for a paddle while waiting for Trace and Wrinkle Carl to get home. The girls settled in to Trace and Carl’s really quickly and got over the initial shyness with Carl as soon as they discovered how silly he was! We spent the next week going to the beach almost every day and checking out various sites and attractions around the area.

The booger-heads turned three on the 13th and were all set for a HUGE day at ‘Tracey’s zoo’. We were there when it opened and having an insider as our guide not only got us in for free but meant we got a heads up on when and where the good stuff was happening! Before morning tea the girls had already patted a baby alligator which made their day but that was just the beginning!

We wandered around checking out various animals.. especially the crocs and alligators. Then we headed to feeding time at the kid’s zoo. Auntry Tracey bought ‘her girls’ a bottle of milk each so that they could feed twin baby goats… sooooo cute! I so want a goat now! The booger-heads were wrapped and sooooo much braver than I thought they’d be with all the people and baby goats trying to get in on the act!

We headed to the ‘croceseum‘ next to see the ‘big show’. It was bad timing for the girls as they were ready for a sleep and Zoe slept on my lap through the snake and bird show. I woke her up to see the crocodiles eat rats which she enjoyed but she was VERY grumpy for a while after that! A pat of an enormous python helped to cheer them up a little though and food always helps.

We ate then headed out to Tiger Temple to watch the tigers playing and swimming… the girls were grumpy and unimpressed but the adults were most impressed… just such an amazing set up and amazing people. All based on the philosophy that if you see and experience the animals up close in a personal way you will be more likely to invest time and money into saving them and it really worked for me!

After the tigers we lined up to see the elephants be fed… well at least I thought we’d just be watching them but no, we were actually going to be feeding them! Masses of people lined up in orderly lines and filed through to hand feed a piece of fruit or vegie into the elephant’s waiting trunks! It was SO COOL! I was once again surprised that the girls were brave enough to have a go, what with the crowds of people and the HUGE elephants, but not only did they have one go, they lined up again and again and had about ten goes! I think it was the highlight of the day for all of us!

On the way back to the main gate we fed some kangaroos, and patted a wombat, did some shopping and headed home.. exhausted but very very happy. I was really impressed with Australia Zoo. The enclosures and set up and just amazing, it is so incredibly clean and well run and just HUGE! I am sure it helped that we had a staff member escorting us as Trace knew everyone and everyone knew her and I am sure that meant we got to do and see things that we probably would have missed otherwise but wow what a place!

Aunty Tracy cooked the girls a birthday cake which they scoffed after dinner and then they crashed. Without a doubt this was the best birthday they have ever had and probably will ever have for years to come. I didn’t even have a moment to contemplate the last three amazing years, let alone be melancholy about it all… will have to blog it later I guess!

We headed off last Friday… drove to Coffs Harbour for the night then on to Sydney for a visit with my other best buddy. I think we may have put him and his partner off having kids for life, but they seemed to enjoy my girls delight in the whoopee cushion and didn’t mind too much us sleeping all over the lounge room floor in their swish apartment!

Then home in one mammothly long drive from Sydney. I can totally understand the people who turn around and slap their kids legs from the front seat… let me tell you the temptation was there many times even though I know it would only have made things worse! So we resorted to listening to Nemo on CD way too many times and a heck of a lot of junk food… which now we are home we are regretting big time since stopping the junk food is a lot easier said than done!

But it’s good to be home. Nothing like a break from every day life to make you take a step back and reassess a little. I am home with some plans and big ideas and a few changes in the wind. I miss my far away friends even more now but it’s really awesome to know that even though we live thousands of kms apart now.. nothing has changed.

I didn’t take all that many photos. I know , ‘shock! horror!’ I can hear you all gasping from here! But we spent a lot of time down at the beach and I couldn’t be bothered lugging the big camera down there and worrying about it while we were in the water, should have taken the point and shoot I know but I didn’t! So here is a few of the semi decent ones just to give you a taste… 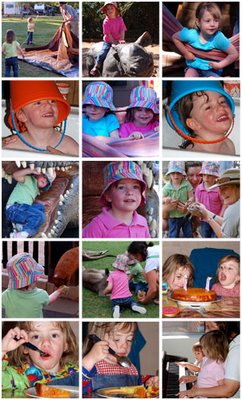 Home » Did you notice the silence?