Ok so it’s actually Tuesday here but the girls at the digichick have a Monday blog challenge and I thought I’d have a go, since I never get the time to attempt any of their scrapping challenges. So this week the challenge was to share a favorite Christmas memory….

Christmas was always pretty magical for us as kids. My Mum loves to go the whole way, and even though we knew the deal about Santa very early on, we all loved playing along even when we were teenagers. My Dad has even been known to go out scouring the neighborhood for ‘reindeer poo’ to leave on our front lawn for authenticity!

So when I was pregnant for the first time I imagined that I would be hugely pregnant over Christmas and expected to be able to spend it doing nothing much except looking at old photos, talking about memories and dreaming of making my kids’ christmases fun as well. Except of course things didn’t go to plan.

For anyone who doesn’t know I am the very, very lucky mum of identical twin girls (I really should post a proper entry about how that came to be soon!). They were supposed to be born at the end of January 2004 but instead arrived mid November 2003 after lots of problems with Twin to Twin Transfusions Syndrome. My plans for a pregnant Christmas went out the window and I just didn’t want to think about Christmas at all.

The weeks leading up to Christmas were a blur. Every day the same routines of expressing and going into the hospital and sleeping, no time for anything else and certainly no time for Christmas.
Every few days the girls would be trialed off the c-pap and every time they would fail and go back on my heart would break a little more. I started to feel like they would never get away from those horrible tubes, that they would never be off the critical list. That was all the mattered, bugger Christmas!

But it’s hard to ignore Christmas when the rest of the world wants to celebrate! The decorations went up around us in NICU while both of our girls struggled to breathe on their own. So I was forced to get my head around the fact that my girl’s first Christmas would be spent in hospital….. but I wanted so badly to spend it without the bloody c-pap.

Christmas crept closer and closer and again and again they would fail the trials off c-pap… 5 long weeks of waiting and hoping and finally the week before Christmas Izzy got of c-pap and stayed off! From then on she never looked backed… within days she out of the isolette and was transferred across the hall to SCN just waiting for her sister to join her.

Zoe on the other hand just couldn’t manage it… and failed yet another trial. But a few days before Christmas after a big rest between trials Zoe went off c-pap and onto O2 and was stable. Finally my girls were transferred upstairs to the special care nursery and we would spend Christmas without c-pap!

The day arrived… Si had worked night shift Christmas Eve so I went into the hospital on my own. It was almost like any other day since the girls had been born, but it wasn’t. When I arrived Santa had visited my girls and I was greeted with this site…. 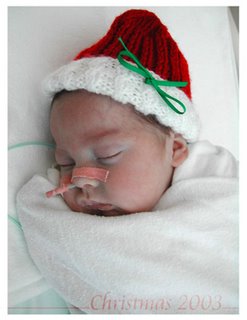 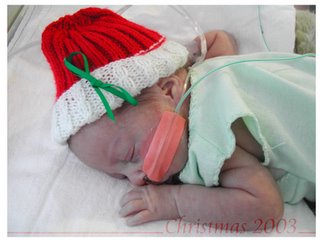 Tiny knitted Christmas Hats and a bunch of other tiny goodies left at the end of their cots as well as a card the nurses had made for us from our girls. Never has a present touched me so much as this one did. That a volunteer had spent time knitting all the babies in the nursery tiny little hats, that the nurses had gone to the trouble of taking photos of each baby and handwriting a card from each of them for their parents, that Santa hadn’t forgotten my girls on their first Christmas.

It’s not at all what I had imaged my girls first Christmas to be, and I wouldn’t wish it on my worst enemy, but it is something I will never forget for as long as I live. I had my two tiny miracles, finally on the road to coming home and people who I had never even met had gone to so much trouble to make our first Christmas together special.