Yes, the beach. And yes, it is the middle of winter and not exactly beach weather.. I do know all of that. But some crazy Aunt suggested that my girls might go to the beach to feed the seagulls on the weekend, and so guess where we had to go on Sunday…. to the beach. 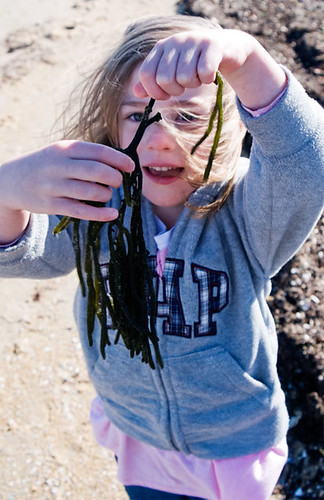 It was windy, very windy, and cold… but at least the sun was shining. We took the left-over chips to feed to the seagulls. the Twinadoes were very keen when we left home. I had hopes that we wouldn’t actually have to get out of the Big White Bus to feed to seagulls, but the girls had other ideas. So we all rugged up, I strapped Muski onto my back and we walked down between the beach boxes to the water’s edge to feed the seagulls.

Have I already said we were there to ‘feed the seagulls’???

Pity that there wasn’t a single seagull on the whole of Brighton Beach.

We did see one fly past in the distance and Nanny crazily threw cold chips at it in a vain attempt to catch it’s attention. It didn’t work.

The girls were suddenly not so keen on the whole seagull thing. They made a small sand ‘hump’ instead and decorated it with shells and rotting sea-weed while I attempted to take photos in the wind and way too harsh sun. All the while, Nanny kept tossing chips at passing seagulls. Eventually she got one to stop.

Now isn’t it a general rule that once one seagull arrives to eat your chips, a hundred others arrive seconds later to feast? Sadly, no one was following the rules on Sunday. A handful of not very hungry seagulls stopped to sniff at our cold chips and them moved on.

It was cold, it was windy, the was no sea-gulls to eat our chips, we stayed for ten minutes then went back home to put the chips in the compost… Who’s brilliant idea was this anyway?