Blogger has been playing funny buggers all round today but finally I have been able to catch up with a few blogs that I am totally addicted to (and you people know who you are!) and get in here to post the long awaited announcement….. Chickens have been named!!! 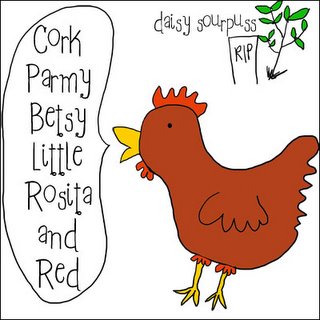 Ok so as Corki – our last remaining refugee from eggsbackestan is shouting out above those are the chosen names. Don’t you all just love my drawing skills with the tablet? See now that image was worth waiting for!

The names above were chosen for the following reasons –
Cork – or Corki as she is more commonly known – because she says that all the time .. ‘cooooooooorrrrrrrk… corrrrrrrk’
Parmy – short for parmigiana just because it’s funny and I like all the food themed names!
Betsy – because I just think that is a good chook name
Little – because one of the hens is way smaller than the others
Rosita – because it reminds of that book ‘Rosie’s walk’
and Red for the Rooster – so yes Red Rooster… because both Renee and Si think it is funny to call him that since he is white… though personally I liked Brewster so the next rooster will definitely be Brewster the Rooster.

So there you go… thanks a HUGE bunch to everyone who took part. I loved all the names that were suggested so I have decided to give everyone the prize! So if you suggested a chook name them email me ([email protected]) and I’ll email you back the link to download the chook kit, that’s if you decide you want a digi scrapping kit about chooks!!! he he he.

Ok in other news….

Anyone have a pineapple they want cut up??????

Ok so that may sound like an odd question but I think I have found a new skill!
My MIL (mother-in-law for those not up with the forum jargon) bought us a pineapple when she was here the other day, a HUGE one! It was still a bit green though so it has been sitting on my kitchen bench for the past few days and each morning when I drag myself out of bed to the chorus of ‘cereal cereal!’ I walk into the kitchen and get hit by the smell of pineapple… mmmmmmmm yum!

But tonight was the night. I’d tried to time it just right, to wait until it was nice and ripe and smelled sooooooooo sweet but not so ripe that most of it was not edible. And what’s more I’d been waiting weeks to try out something I’d seen on TV… yep cutting a pineapple.

I’d seen an episode of Martha Stewart on foxtel at Mum and Dad’s (oh I have to confess I love Martha – something about the odd combination of dagginess and elegance and the totally over the top things she does that just sucks me right in!) and Martha’s guest was Bette Midler. It was bloody funny to say the least but at the end they talked about how Bette had grown up in Hawaii and had worked in a pineapple canning factory and they had her show how to cut a pineapple. It was soooooo nifty and I’d been waiting forever to try it out!

Ooooh I felt so Martha as I deftly attacked the pineapple with my very large sharp knife. I don’t think I really expected to be half as successful as Bette or Martha but by jove I was! It worked great and I got so much more pineapple and so much less waste and it was bloody delicious… and yes I have to admit it, fun!

So anyone got a pineapple they need cut?

What else did we get up to today… well we choofed off to the local farmers market this morning. I bought the girls a $2 bead bracelet each with part of their chinese new year money. We bought some ginger bread cake… mmm yum… some organic potatoes… a sausage each and a little red Quan Yin.

Quan Yin is the goddess of compassion and understanding (among other things) and is a bloody powerful woman (think I have said bloody way to many times tonight, oh well). I hold her wholly responsible for me having twins, though I do have to admit it was partly my mistake for not being specific enough with my question (anyone who doesn’t already know that story ask and I might even blog it some time!) and at least partly responsible for getting us all through their birth and the hellish year that followed. So the girls and I have a bit of an affinity with Quan Yin. Plus one of this years flying stars ie negative feng shui energy thingies (yes technical terms here!) can be dissipated by the use of red or by displaying a figurine of quan yin.. so when the crystal stall (Sif just noticed these people there today, they have some great stuff!) had a little red quan yin I figured I just had to buy her.

The girls were a bit buggered after all that so actually had a decent sleep this arvo, though it didn’t stop them waking up narky as hell. I wish I knew what this sudden bout of narkiness was all about, or better yet how to deal with it without doing or saying things I immediately regret. So after pondering why I ever bother feeding them sultanas as they always end up throwing them on the floor and squishing them into the floor boards, and what little they do eat just come out the other end as re-hydrated grapes anyway I decided we should go outside and do something fun!

So we dragged out the giant box cubby Si had built them from his TV box (yes he now has wide screen TV in his shed… long story) and got out the paints and took of all but sin protection clothing and went to town! I really must remember though, hanging out white washing while two two year olds paint the box, themselves and each other is probably not a good idea… but still we had fun.

And of course they were covered in paint. And of course the blue paint won’t wash off. So of course Zoe has a blue nose and Izzy… well when Si came home and asked ‘what’s that on you?’ she proudly exclaimed ‘painted my volvo’…. ask me privately if you don’t know what a volvo is!

Ah well I should be finishing off my new kits and bits and pieces for the store at DSH which is due back online any time soon if not already… but I have sort of lost my inspiration for today so might just blog surf for a bit and go to bed… there is always tomorrow.