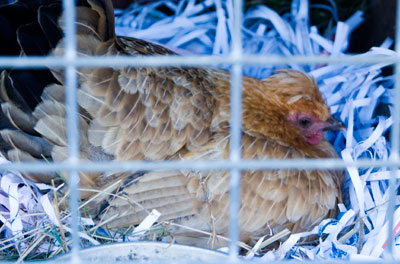 This is Cup Cake… Chocolate Cup Cake to be precise.

She’s our crazy little bantum. She is missing a toe on one foot and has the most huge feathers on her feet so hops around like a mad woman most of the time. This is as close as I can get to Cup Cake at the moment before she puffs up to double her size, glares at me and threatens to peck my eyes out.

She has four eggs under her tiny frame…. one of her own and three others I snuck in there when it appeared she really was going to stay sitting. I have no idea if anything will ever hatch from them. Hamlet, our rooster, is quite young, and although he is doing the deed with anything even remotely hen-like that crosses his path, whether or not he is actually fertile at this stage of the game is yet to be revealed. I candled cupcake’s first egg after a week of sitting but since I didn’t really know what I was looking for I couldn’t tell if it had potential or not. I did see a nice clear air sack and what seemed like it could be a developing chick… but then it could have been something else too. She’s gotten even narkier since then so the thought of putting on my big leather gloves and facing her wroth again to have another look is not really all that appealing.

After a traumatic (for me and the hen) move from the main chook house to her own private condo in the back yard we are now playing the waiting game. I am guessing she’s been on her egg for about 2 weeks and on the other three for about ten days… so we still have at least a week left to see if anything will hatch.

The girls are sure we’ll have four chicks to love and look after…. but I’m not getting my hopes up.