In case you missed the all points news bulletin at the end of last year… while the Twinadoes are old enough to start school this year we decided they would be better off doing a second year of kinder (preschool) and today was their first day.

Despite starting at a new kinder, they pretty much knew the routine, were old hands at dealing with Mamma leaving them and settled in quickly. They came home with drawings and exciting tales about Sparkle and Bluey, the Kinder Budgies. They reported that they didn’t play with anyone (they don’t know anyone at this kinder) but they didn’t cry or whinge at all…. ah if only their days at home were so nice. 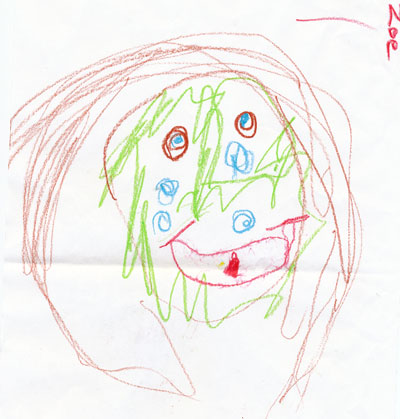 Of course, silly me.. this is not a monster with lots of eyes… “it’s a girl with chicken pox, who’s happy because she’s eating a chocolate, which isn’t a healthy food but sometimes when you’re sick you get to eat junk food anyway.’ – By Zoe. 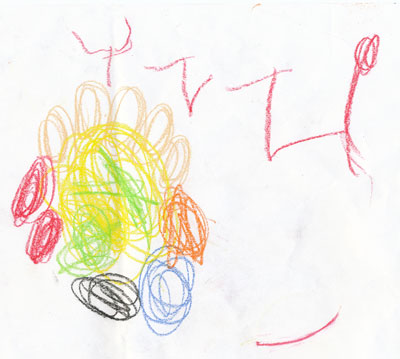 And this is “The most colourful flower in the whole world… and it’s big so all the birds can come and eat it.” – by Izzy and no I didn’t mirror image this picture by mistake she just writes her name backwards sometimes.. all totally normal.

So all in all their second first day went really well and we are all pretty confident that they are really going to enjoy this extra year at their lovely new kinder.