Scrabble is a favourite game around here. My husband’s family love to play and they are all good at it, really good at it. My kids have grown up watching me get beaten at Scrabble by their Grandmother, their Aunt and their Father again and again.

Despite my dismal attempts at the game the girls have been keen to play for a long time. We have Junior Scrabble which is lots of fun and a great game for kids, but it’s not quite the same as the real thing.  So when we opened the package from Nuffnang and discovered a brand new, grown up, Scrabble game, they were ready to play right then and there. I’d been brewing some ideas of how they could successfully play the real deal for a while so it seemed as good a time as any to try them out.

We set out the board and collected 7 letters each, just like in a regular game. We played by the regular rules but to keep it simple we ignored the special scoring squares on the board and we assigned all letters one point each. 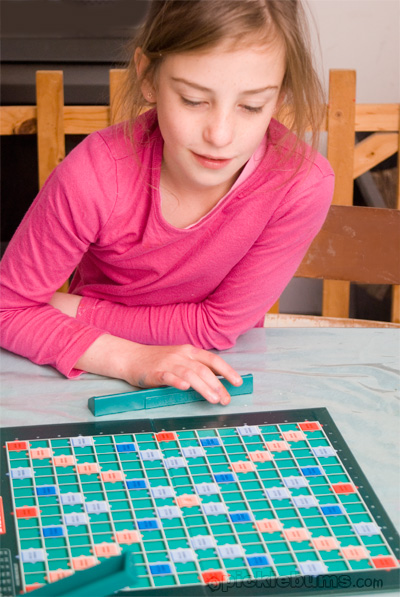 The challenge for my 7 year old girls was to find a spot on the board where they could make a word with their letters. Initially it was all about making a word, any word. As the game progressed they began to realise that the more letters they put down, the more points they would get, so they started trying to make longer words, using more letters.

The girls needed a little help now and then, sometimes just a suggestion of where they could put a word on the board, and sometimes help with making an actual word. I think the more they play the better they’ll get at seeing the spaces on the boards and putting the letters together in their heads to make words. 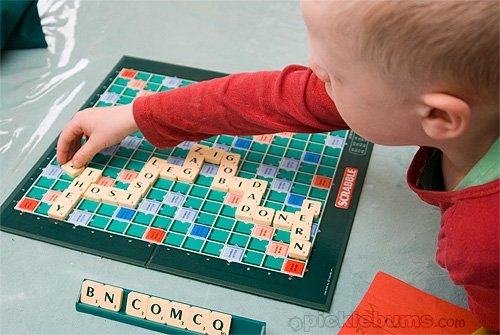 My four year old can’t read, so he obviously needed lots of help to join in, but that wasn’t going to stop him.

I played with him, suggesting words he could put down and letting him choose which ones he wanted to use. It was great practice for him as he learns to identify all the letters. He was also able to count up the number of letters he put down and tell me his score and count out the right number of letters to replace them.

At the end of the game the girls helped to tally up the scores and decide who had won.

So in the time it took for us to play a quick game of scrabble the girls had practised their reading, spelling, logical thinking and maths skills and my big boy had worked on letter recognition, pre-reading skills and counting, and, as it turned out, I was beaten at yet another game of scrabble!

To win your own ‘grown up’ scrabble game just leave a comment on this post and tell me your best story about winning or losing a board game. – This competition is now closed

Entries are open to Australian residents only and close October 28th when I will choose one commenter to go into the Nuffnang draw. View the terms and conditions for more information.

{Disclosure: this is a paid post sponsored by Nuffnang. We received a scrabble game as part of the compensation. Opinions expressed in this post are purely my own.}