It is my darling husband’s birthday today. 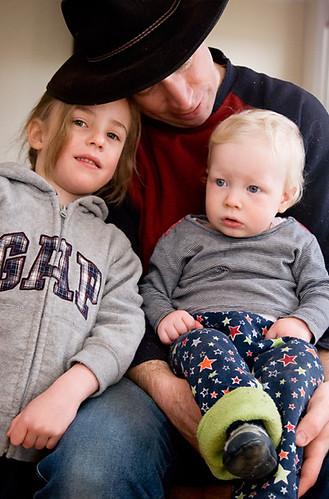 We celebrated on Tuesday – his pretend birthday, because he had to work today and then, as he does almost every Friday night, he’s gone out to play cards with ‘the boys’ so we won’t see him at all today (we were all asleep when he left and will be asleep when he gets home!). So Tuesday morning we gave him presents and then took him out to dinner – Japanese, his favourite.

Despite the fact that he is referred to as ‘Baldy Boy’ on this blog… I really do love him, we just have an odd choice of pet names. At home he is most often referred to as ‘Poo’ or Poopey’ and I mean that in the nicest possible way. Besides, Baldy Boy is a very appropriate nick name, since he has very little hair. He didn’t have much hair when we met way back in… um… er…..

Well let’s see… we got married in March 2000 so that makes it eight, almost nine years we’ve been married now. Before that we lived together for a while and before that we dated on and off for a bit.. so I guess I must have been 23 when we met, so that was um… 12 years ago! So yep, he was pretty much bald then, unless you count the horrible long pony tail of hair he wore down his back, and he is still bald now… and that is how we like him.

He is a good and responsible man, so much so that it drives me insane sometimes! He is the sort of guy who you can always call on for help. He’ll always be there to help you move house, fix a leaky tap, drive you to a funeral, whatever you need, if he can possibly find a way to help, he will.

He works damn hard for our family. I know he says that working the odd hours he does (two 12 hour day shifts followed directly by two 12 hour night shifts then four days off) suits him, which it does – he can fall asleep at the drop of a hat, anywhere, any time and snore like a foghorn even if only for 1 minute! – I know he says that it suits him, but I also know that it is hard both physically and mentally, but to keep us afloat and to allow us the luxury of me staying home with our children he does it without a second thought.

Not only does he work hard at work, he also works hard when he is home. There is always something to be done around this place and he is constantly tinkering with something. Mind you, this I really do believe he enjoys. Last year I got him a t-shirt for his birthday that says ‘I love my tractor more than my wife’… and I think some days that is pretty true. He has two tractors – because you know, our ten acres of weeds really needs two tractors to work it… His first tractor is what we lovingly call his ‘geriatric tractor’ an old Massey Ferguson that he did up and bought back to life not long after we moved here. Then, more recently he went all modern with a little kubota to pull the slasher and run the rotary hoe and there is nothing he likes better than firing up the tractor for a bit of a mow.

If it is not tractoring it is planting trees or working on the garden or fixing this or building that. When (please let it be when, not if… ) renovate next year it with the Baldy Boy who does the majority of the work himself. He is very cluey with building stuff… he just knows a lot of stuff… or fakes it until it looks right.

Of course he is also a good Dad. I am not sure he quite knew what he was getting into when the girls were born… heck I have a degree in early childhood ed and I didn’t know what we were getting into when we suddenly found ourselves parents to these two tiny sick babies… but he has definitely risen to the challenge. The girls think the sun shines out of his backside (much to my annoyance at times I must admit) and love nothing more than spending an afternoon in the shed with their Dad watching terrible DVDs and eating crap that I won’t let them have. Muski is fast learning the joys of ‘shedness’ too and it just makes me grin with delight when I watch the four of them trudge off through the grass into the shed for an afternoon of Dadness.

So yeah, he’s responsible, hard-working, handy, a good dad…. but all that aside he is also my life.

He annoys the hell out of me often and shits me to tears some days. He has chronic domestic deafness and is the worst shit stirrer I’ve ever met. He can’t walk past me without trying to grope me and he snores in three tones loud enough to rattle the windows… yet despite all of that I love him, which in my book says a lot.

So if you happen to be secretly reading this Poo (he says he doesn’t but I am not sure if I believe him or not)… please stop grabbing at my boobs and damn well listen when I talk to you, and I love you, Happy Birthday.