We have some new residents at the Pickle Farm. 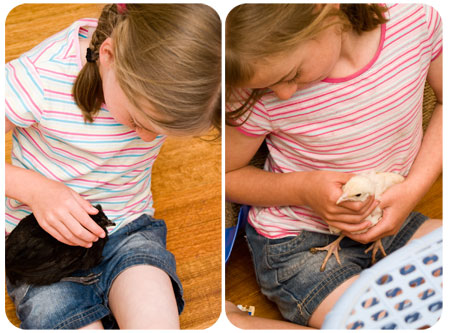 Two weekends back I took a deep breath and did a brave thing. I bought four young hens from the farmers market.

It might not sound like a very brave thing but since we’ve been loosing chooks to the dreaded chicken plague (aka mereks disease), slowly, one after the other, over the past eighteen months, to begin replacing them is a little scary. We were down to just four laying hens, and between the old age and the broodiness we’ve had long long patches with no eggs at all. So it was time.

We decided on four 10 week old hens from the lovely young girls with their organic chook business, figuring that since their blood line has not been vaccinated for Mereks that they hopefully have some genetic resistance. Being young they didn’t cost us much either, so if they do succumb, while it will be frustrating, we won’t be throwing away piles of money.

Naming rights were shared around… one for Zoe, one for Izzy, one for Muski and one for me. Which seemed fair until the girl’s began to slowly but surely work at influencing all of us to name them what they wanted. They went with Midnight (the black one) and Star (the white one) and then lobbied for two more names that worked with their current night sky theme…. Sparkles and Moon. Not so horrific after all.. though Muski is still calls his ‘Rose Dinosaur’ when the big girls are not around.

So far they are settling in well, at the bottom of the back yard pecking order. They are yet to be introduced to Hamlet the rooster and the two old layers. I think they might need a bit more size on them before running with the big girls. Fingers crossed they grow up to be good strong layers and we can begin to replenish our stock from their fertile eggs.