With weeds and snakes and very little water. That’s how my garden grows… 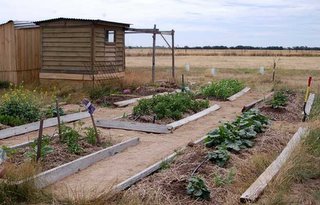 But it is doing surprisingly well despite all that and I am soooooooo excited! We have planted and managed not to kill all of the following….

Bok Choy – which we have been harvesting and eating and it has now started to go to seed so I hope it will self seed and come up again!
Coss lettuces – which we have eaten and eaten and eaten and they are still going!
Carrots – not sure how they will do, the soil is a bit clayey but the seeds sprouted and grew so that is exciting as it is!
Onions – tree onions I think they are but I am not sure as they came from my mother-in-law.
Tomatoes – some I grew from seed (how ace is that!) and some we bought as seedlings
Zuchinnis – all grown from seed!
Cucumber – grown from seed
Pumpkin – grown from seed
Corn – grown from seed and looking very speccy I have to say!
Capsicum and Eggplant – not sure these will ever bear fruit because of our cold nights but we’ll see
cantaloupe and Watermelon – mini varieties of each grown from see – again not sure they will ever bear fruit as they are still only tiny but I live in hope!
Strawberries – yum!
and basil and chives….

We still have some beans that need to go in and some more tomatoes… it will be a late season for us as we had to wait till the last frost to put most things in which wasn’t until the end of November up here… but that’s ok I am patient and am loving the feeling of actually growing things!

Si and I spent the day (off and on) a few days ago putting down weed mat and sand on the paths between the beds. I had given up on trying to stop the grass and weeds growing there and whinges until Si helped me mat it! Then we layed out the edging that was once an ancient sheep shoot in the back paddock – but they are yet to be staked properly as we haven’t had time to go get any stacks… but still I think it looks really speccy now!

The girls are not particularly keen on me gardening though. They are ok for the first half hour outside… they potter and dig in the sand pit or whatever. Then the next 20 minutes or so I can amuse them by giving them a bucket of water and telling them to water the trees then that’s the end of it…. Hardly enough time to do anything which is a bit disappointing. I am not sure what gives here either. A few months ago when it was still cold they were in love with being outside and would just go off on their own and happily play for ages… now all of a sudden if they see my pick up a shovel they NEED me. *sigh* ah well it’s a good thing the vegies are growing on their own at the moment!

You can see in the background of the first photo our ‘would be chicken and goose house’. It is one heck of construction! Two separate houses – one for chooks and one for geese or ducks (though I am determined to get my fancy geese!). In true Si style he has made both just a bit quirky, but not by intention! The chook house roof is at an elegant angle… Si says it was the easiest way to get the water to drain off it but it looks like one of those fancy corrugated iron houses with the wavy roofs you see now days! The goose house is the old cubby from Si’s Mum’s place… ‘the nut house’ as the sign over the door is. Though Si thought it best if it was up at the same height as the chook house to built it up and bit… pity that made the door almost a metre off the ground with a great drop to the dirt on the other side of it!

Sadly we don’t have any chooks or geese as the house is not done yet. It still needs to be roofed over with chicken wire and it needs a gate. It’s been like this for a few months now…. but I am determined to have it done before Si goes back to work in a little over a week. Though in all honestly I think I will be pushing my luck!

The girls are having a bit of a visit from the snot monster at the moment. They are both licking snot from their lips and generally being miserable. Nothing major really, just enough to keep us at home and missing out on playgroup today. But still a few quiet days at home won’t kill us after all the running around we’ve been doing the last few months… who knows I might even make a start on my art journal or even get some designing done!

Home » How Does Your Garden Grow??