I know I know I am a bad blogger… too many other things above blogging on the list at the moment I am afraid. But since I had a spare moment thought I’d pop a random twin thought in here that has been wandering around my head for the past few days…

The last few times we’ve been out in public we have come across the ‘wow they are alike aren’t they?’ comment… or it’s more abrasive partner ‘Oh my god they are identical!’ and the usual questions that follows ‘can you tell them apart?’ and ‘do they have the same personality?’

When I am having a good day and not finding those type of comments incredibly annoying I find them really quite funny, mostly because I don’t think my girls are alike at all!

Though I have to admit some days they must seem very similar at a glance, but I can see so many differences between them, even purely physical differences, not to mention all the other differences. I can understand why people ask if I can tell them apart though, (even if it does annoy me!) because I have to admit it was one of the things that worried me before they were born; would I be able to tell them apart as little babies? But having been through it I know now how silly that is… they were different from day one and I have always had an easy time telling them apart.

Personality wise they are the same in a lot of ways but very different in so many others. I guess they are as alike in personality as any other siblings, twins or not. I can’t (and don’t like to) label one as the ‘outgoing one’ and one as the ‘shy one’ like people often want me to do, because they change often as any child does. For a long time Izzy wasn’t very confident in crowds and wouldn’t go to people she didn’t know well, now it is Zoe who is frightened of lots of people and noise and takes a long time to warm up. They both like lots of the same things and also don’t agree on a lot of things. They both love to paint, but Zoe is very careful and doesn’t like to get paint on her fingers, whereas Izzy is not having fun unless she is making a mess. One is good at something and the other at something else….

Despite being genetically 99.8% identical (yes they have been tested as part of a research study) they certainly are not identical … I like to think of them as ‘the same… but different’! 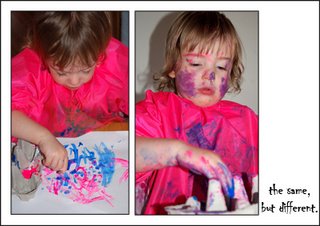