Apologies for anyone who has tagged me recently or given me an award – I always intend to blog these things and file them away for this day or that and then totally forget. What can I say? My mind is a sieve… a pregnant sieve.

But I’ve remembered this one… Sif over at ‘At the Bottom of the Garden‘ tagged me for this Me Me about Re-posting your first ever blog post. 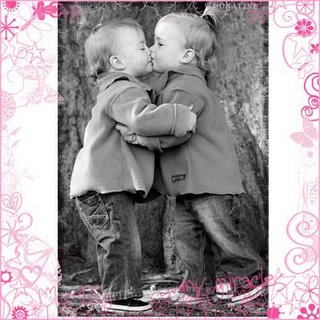 Sitting here… 11:27 pm Saturday night here (must remember to get one of those clock thingies for this!). I have just finished printing out 24 4×6? layouts for my step mother-in-laws ‘brag book’. It was her birthday on Wednesday and although we already contributed to her present this week has been total hell for her, so I figured she could use a little something extra to make her smile. This mini layout is a favourite of mine from her book…. my two little miracles…. and we could use another miracle here about now too.

My Father-in-law had a heart transplant almost two months ago now. He’d been unwell with a virus in his heart for longer than I’ve known him (so more than ten years) and the last few years he’s been really really ill. Two pacemakers and loads of drugs failed to do any good and it became clear this year that he was going downhill really fast. So his only option was to wait for a donor heart and have the transplant….

The call came only 6 weeks after he was put on the list! A total surprise as we all expected he’d have to wait a lot longer! We all rushed in to say our good lucks and possibly our goodbyes but thankfully the operation went well, the heart was working great and in a little under two weeks he was home and looking better than I had ever seen him! I couldn’t believe how lucky we were! He was cracking jokes and mucking around and telling the girls it would only be a few more weeks before he’d be well enough to hold them for the first time. He even came to the zoo last Sunday for the girl’s birthday something he’d never have been able to do before the transplant.

But here we are less than a week later with every body part crossed hoping he will live. Things went downhill fast this week. He is now in critical tissue rejection, he has a lung infection and his BP is out of control. Last night they put him in a medically induced coma to ventilate him and put him back on heart/lung bypass to give his new heart a break while they try to combat the rejection and infection.

The doctors say that they have been through this many times before with others and he still has a 70-80% chance of coming through all this, which was much better than I had hoped for. But because my big pram wouldn’t fit in the waiting room, the girls and I waited in the hall while the doctors spoke to the family and we saw him being rushed to theatre to hook up the bypass machines…… it was almost surreal… like I was watching an episode of ‘Grey’s Anatomy’ and yet this was my father-in-law…. Grampy….

So we are just waiting now… it will be around 5 days before they will attempt to take him off bypass and see what happens… I have no idea what will happen if that doesn’t work.

So many things whirled through my head as I drove home last night. It’s just not fair really…. not fair to us or to the person who donated their heart and their family. But of course this is life… bad things happen and we have to deal with them. But I can’t even begin to imagine what it would be like to loose my father… my heart aches so badly for Baldy Boy and his brothers and sisters having to face this. And to loose a husband…. that is too scary to contemplate.

I know we’ve had our fair share of miracles but I so hope the universe has another one in store for us right now.

*My FIL lost his battle and died on December 22nd 2005. The above photo is of our girls aged almost two.

So now who else wants to do this Me Me… it’s easy really (which is probably why I managed to remember)… so step right up and claim your prize! If you play along let me know and I’ll add your link here!

Home » In the Beginning…