Inbetween rain showers the girls convinced me we should have a quick trip out to the park yesterday. I didn’t take much convincing because I’d heard that the park up at Riddells creek had ducks and I thought it’d be fun to go feed them. It was a good plan… except I left the multitudes of stale bread we have at home. I should have known then, that it would all end in tears.

We found the park and the ducks… or shall I say they found us! No sooner were we in the gate then they were waddling (at a fair pace for a waddle too) up the hill, from the lake, to greet us. These are not like the wild ducks we get around here, I suspect these are domestic ducks gone feral. There is one big goose and a selection of other pretty ducks and drakes. And they were hungry. 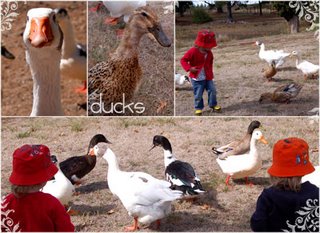 It was about then that I realised I’d left the bread at home so fished out our box of biscuits (it is always important to travel with a small container of dry biscuits when you have a toddler or two in tow) and gave a handfull each to the girls to either eat or share with the ducks. Being my children of course they ate them. The ducks were not happy. I threw a few broken up biscuits over the ducks heads to momentarily distract them while I explained to the girls that it might be a good idea to share a few biscuits with the ducks. No sooner were the words out of my mouth than the ducks were back, in our faces, demanding that the girls comply, or failing that, that I just hand over the whole container!

So far, while they had been loud and close and inquisitive, none of the ducks seemed nasty, but I just had this feeling that it wouldn’t be long before small children with faces right at duck height might be seen as a local duck delicacy. Once again I should have known then it would all end in tears… yet I forged ahead, determined.

Izzy had the right approach, breaking off bits of biscuit and chucking them. The only problem was that she would throw them out and promptly run to where the biscuit had landed. The ducks, sensing that this ravenous child might get to the biscuit and eat it before them also descended upon the very same milimetre of grass. A melee ensued. Izzy freaked and flapped her arms which made the ducks freak and flap while I ran to extract her from the middle of a cloud of feathers.

Meanwhile behind me stood Zoe, doggedly eating all of the biscuits and refusing to share with the ducks. A small brown duck noticed this and took obvious offence. Up came the duck and with a lightening fast jab, grabbed the biscuit just as Zoe put it to her lips. Then, to reassert who the biscuits really belonged to, proceeded to peck the remained out of Zoe’s other hand. She lost the plot!

I did the only think a mother could do. I chucked what was left of the box of biscuits down the hill, grabbed a toddler under each arm and headed to the car.

Strapped into the car and calmed down somewhat I assessed the damage… not that bad… no permanent damage from the duck attack, not even any blood. Ok, time to go home…. but no, wait, what is that hysterical crying coming from the back seat??

“But we’ve just been to the park.”

“NO park with swings and slides”

Ah ofcourse… that wasn’t a real park, it only had a pack of rabid ducks. A real park has swings and slides. So back down the road for a quick swing and slide while I sat and contemplated how I really should have known… It’d all end in tears.

Home » It’ll all end in tears…