We had a quiet day at home today… after a bit of a manic week.

Izzy was the first up at about 7:30… now that they can both get out of their cots I usually wake to the patter of little feet and then a small voice demanding ‘milk’ right in my face. Izzy had a pretty big feed this morning, well more than the one or two sucks inbetween dozing that she’s been doing latley. Then she got up and lay on the couch to doze infront of ABC kids till Zoe woke up.

I have a standing rule that I do not get out of bed (well not permanently I did get up and down as is demanded) until both girls are up. I figure it’s just not worth my while getting up and going then having to go back to bed to feed the next sleepy head as morning milk HAS to be lying down milk… and hey I am totally fine with that! So Zoe woke at about 8ish, came in for her big feed then toddled off to find Izzy and they watched Tv for a while and I dozed until I got the call… “want cereal!”.

So we had cereal, I farted around a while because playschool was on and the girls love that. Then we got dressed,,, changed the first two of many stinky bums (waaaaay too much fruit in our lives at the moment!) and laughed at Zoe who had found the bottoms of her bikini and put it on her head…. which, mind you, is the only place it has ever been worn!

The girls nagged me all morning to ‘go in the car’ or ‘see the chickens’ but it was so damn hot and windy! I don’t mind the heat, we’d have been outside and in the paddling pool if it wasn’t for the wind! We had gale force wind all day here and my poor vegie garden took a buffeting, the windmill was going even though it was ‘turned off’ and there was no way we were staying outside in that. So we played play dough and did some drawings, ate the odd crayon and lump of play dough until it was lunch time.

Three ham and cheese sandwiches later they girls where out like a light again. They are such good day sleepers these days… I almost forget how horrendous it was during their first year!

While they slept I made vague attempts to do some tidying and decluttering I had promised myself I’d do today. I shifted a few things around and attempted to organise my desk…. but I think I made things worse. Of course I was doing all this while the computer was on… and online… so not exactly conducive to getting anything done except catching up on AB and DSH and various blogs!

When the girls work up we had muffins that Nanny made yesterday (I love it when my Mum comes to visit or we visit them as we always end up with care packages full of good food!) and all three of us pottered all afternoon. A bit of dancing and dressing up and a bit of backing up of computer files. A few cuddles and kisses and the odd tantie here and there plus a trip to the post office.

Things started to cool off at around 5ish. The wind died and HUGE black clouds rolled in… it was actually quiet eerie. I opened up every window and door and put something on for dinner. Friday night is cards night for Si so I don’t bother to cook just for us girls, we eat a quickie junk meal, usually fish fingers, frozen peas and corn and chips which was what we had tonight.

While dinner heated up we sat on the front verandah and watched the clouds and lightening…. I think we were all glad to be out in the fresh air and the clouds were amazing. HUGE grey and swirley right over our house but not going anywhere. Since it was still rather warm inside and the girls didn’t want to go in we decided to bring the table out and sit on the verandah for dinner. 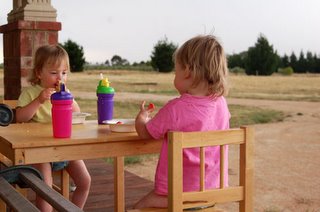 The three of us sat on the verandah and watched the rain and lightening out over the hills. We watched the magpies splashing in the over flow from the windmill and the cows dancing next door. We ate our fish fingers and frozen vegies. Just as we got to the strawberries for desert it started to rain… big rain. It splashed onto the table and I though the girls would be running for the door but that LOVED it! They shoveled in all the strawberries then dancing around in the wind and the rain. 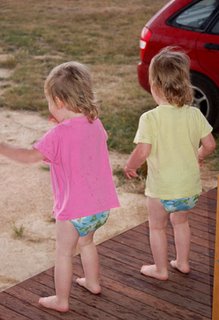 It’s moments like those I almost feel like I am in a movie… it is too surreal… this can’t be my life, can’t be this lucky!

Then it was bath (another reason why I love it here… where else can all three of us take a bath with every door and window wide open and know that no one else can see us?!?) and then a few books, milk ( for Zoe only Izzy has totally given up her night feed) and bed.

Once again a few issues with Miss Izzy wanting to sleep in the big bed… which would be fine except she then goes and pokes at Zoe and wakes her up! But after a few ‘negotiations’ she finally left poor Zoe in peace and fell asleep in the big bed (though I put her back in her cot later!) and I came in here to talk to my bestest buddy in the whole world who we all miss like crazy!

And ofcourse I’m still here now….. so just an ordinary day here really… a day like any other….

Except that today my new nephew, Liam Peter was born.

And today, two years ago we were finally able to bring our girls home from hospital.

So yep a day like any other, except for a few important differences.