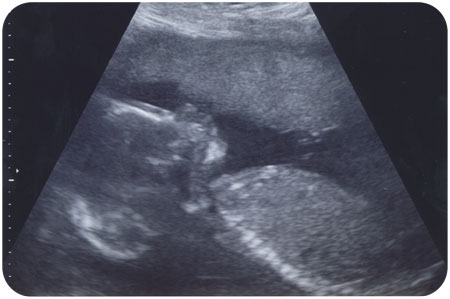 Under the little (ok not so little) layer of belly fat there is movement.

I’m 20-ish weeks pregnant, or there abouts (I’m not so hot on counting this time around and never know when anyone asks me.) and finally there is movement.

I’m not one to feel movement early in pregnancy.

It freaked me out a little when I was pregnant with the girls when I got to about 18 weeks and still hadn’t felt a thing. Dr M told me that often twins don’t move as much as there isn’t as much room as with one, but I suspect he was just being kind to a worry wart first time Mum.

I don’t remember exactly when I felt the girls move, nor do I recall when I first felt Muski move, but I know it was later rather than earlier on both occasions. This time around I wasn’t expecting it to be any different, but I confess to having lay in bed on a number of occasions trying to be dead still in case I was just missing it.

It’s not that I was worried, (well ok maybe just a little bit), just curious. Maybe I am just not paying attention? Maybe I am never still enough to notice? Maybe it is the hefty layer of lower belly flab that insulates the feeling? Or maybe it is just how my babies lie in the first half of pregnancy?

While the constant little internal rolly pollies are a little disconcerting (on what other occasion do you feel your body move internally because of someone else?) and cause me to pee six million times a day, and I know the constant movements are going to get bigger and more annoying as the weeks go on (I remember thinking the girls were having a wrestling match and that Muski was trying to claw his way out on more than one occasion)… it’s very reassuring to finally be able to feel the alien child within.

And on the off chance we go for #5 (my mother just had a small heat attack reading that!), which really is so very unlikely, but you know, just in case… I’ll be able to look back here and read this and remember that I don’t feel anything till at least 18-19 weeks…. so stop worrying potential future me!

Also reassuring was my 20 weeks scan – see the photo above.