My baby boy is officially one year old today… well at just before 2am this morning to be precise.

It seems like he has always been with us. It seems like being pregnant with him and birthing him happened such a long time ago and that his babyhood slipped past without anyone realising. Though I still get a big goofy grin on my face when I think about how he was born and I can still remember every second of it like it was yesterday. It was nothing spectacular really, nothing like the drama that enveloped the Twinadoe’s birth. It wasn’t even very hard or very long or even all that painful, but it makes me smile none the less.

I was pregnant with him forever – ‘forever’ meaning 42 weeks and 2 days… which I know technically isn’t actually forever but let me tell you in the last 2 weeks and 2 days it felt like forever ten times over. Not because I was over being pregnant, I actually really quite enjoyed it (well not the spewing part) this time around, but because I knew the longer I was pregnant the less likely I was to birth my baby normally, naturally, not via c-section.

I had chosen to have Muski at the same hospital and with the same OB that I had when I was pregnant with the girls. Not everyone’s cup of tea, especially not when you are hell bent on a natural, non-invasive VBAC (vaginal birth after cesarian) and expecting to do it in a hospital that doesn’t have the best track record for VBACs (to put it mildly) but after much research and contemplation I decided that while I do believe in home birth as a valid choice for women, this time, it wasn’t for me. Because of my history of having very prem babies I wasn’t able to birth in a birth centre or even in a smaller local hospital (not that we have one), but I was ok with that, I liked my OB a lot (we have history, him and I, serendipity, fate, or something) and I liked the hospital and I had confidence that it would all just work out ok.

Despite a few wonky moments early on everything with the pregnancy did work out just fine. I declined the tests I wanted to decline, enjoyed taking the girls into my OB visits and all was good. All was still good at 41 weeks when I decided against booking a repeat c-section and it was still good at 41 weeks and 4 days when I decided I still wanted to wait… but my confidence was wavering and I started doing every crazy thing you can imagine to make myself go into labour. By 42 weeks without even a twinge of labour, even though I knew that Muski was quite happy in there, I had lost all confidence that I would ever ever have this baby and I booked a repeat c-section for June 26th, at 12:30pm.

That weekend I tried one final crazy ‘natural induction’ method and then just gave up, resigned myself to another c-section by telling myself that at least we’d get to meet the baby soon. Sunday morning at about 4am I woke feeling ick, crampy and cold…. oh hang on a minute did I feel crampy?? Yes I did! I don’t think there has ever been a person so happy to feel a bit of pain! I wrapped myself in a doona and sat on the couch in the dark willing the crampiness to ramp up into full on labour… eventually the rest of the house woke up, the lovely S was staying the night (she was to be our support person since she is an ex-midwife) so the house was busy for the morning while I held my breath waiting for something more to happen. It didn’t.

We went next door to the Olive Grove’s open day, we had a BBQ and I remember meeting a woman with a big pregnant belly and her saying we must be about the same amount pregnant, and I remember her face when I said I was 42 weeks and 1 day! We sent S home, and I arranged to drop the girls at L’s house while we went in for a scheduled monitoring session that afternoon. When I rang the hospital to say what time we’d be in for the monitoring I casually mentioned that I might be in very early labour… the nurse asked the obligatory questions – how painful and how far apart, the answers being not at all painful and no idea. Still they suggested we pack a bag ‘just in case’, I thought they were nuts and told L we’d be back to pick the girls up before dinner.

We got to the hospital around 4:30, hooked up to the monitors, yes definitely contractions (ace!) and all fine and good. Can we go home now? Um no… lets just get the Ob in to check you first. We wait, I am keen to know if these ‘contractions’ are doing anything at all or just messing with my head! My OB has just gone off call, we see his partner and he declares I am at 3 cms.. woohoo! Can we go home now? No.. they want us to stay…. I still think they are nuts, labour, real labour, hurts doesn’t it.. this didn’t hurt… But we stay… and about 8 hours later with minimal pain or problem Muski was born into my arms a whopping 4.6 kgs (10 pounds 3 oz) of blondness! 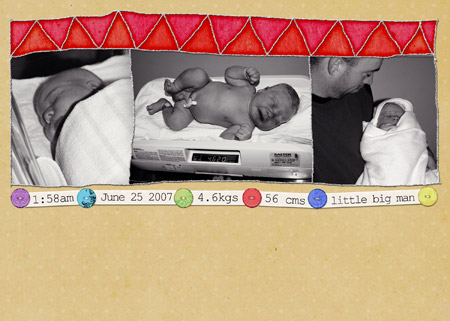 As I sit here typing this I still wonder how it all happened so easily in the end. After the trauma of the girl’s birth, after thinking that Muski would never be born on his own, in the end he was born without fuss and drama and that was that. How freaking ace is that??? That’s why I grin like an idiot when I think about it 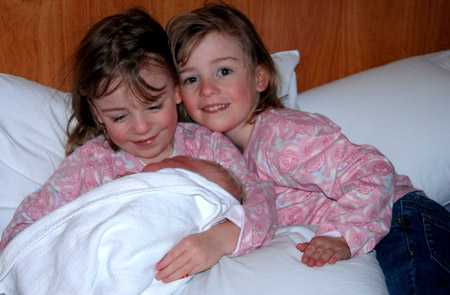 We bought our little snowy haired boy home after two nights in hospital and it’s been like he’s been with us always ever since.

His first year was probably mostly notable for it’s lack of sleep and poop, but apart from these little (ha!) bumps in the road he is just a delight, and even more so now that I we have finally got him to sleep and poop at regular intervals! He has happily eaten his way to being long and just slightly chubby – a BIG difference to his sisters at this age who were tiny scrawny things. 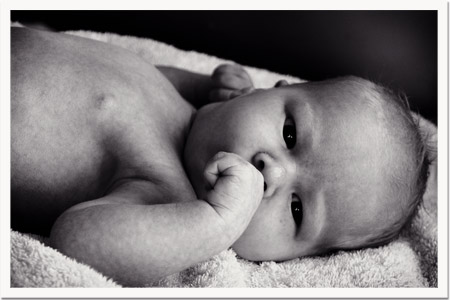 He is as cheeky as cheeky, with a wicked grin and a frightening stubborn steak (and yes we all know where he gets that from!). He grunts and shrieks like a wild animal when he doesn’t get his way and cracks up into giggles at the oddest things. He thinks his sisters are the biggest nuisance in the entire world and also the best entertainment – these days he will even clap his hands in raucous applause if they manage to make him laugh with their antics.

For a long time he had his own style of commando crawl.. on his belly propelled along but the big toe on his right leg, but while we were in Queensland in May he mastered a true crawl and is unstoppable now. Cruising the furniture, the walls and anyone’s legs if they stand still long enough (make sure you pants are tight enough of he will dack you in a second) in the last few days he’s started to stand on his own, though his sisters are hoping that actual walking is still a fair way off as they are not ready to be chased! 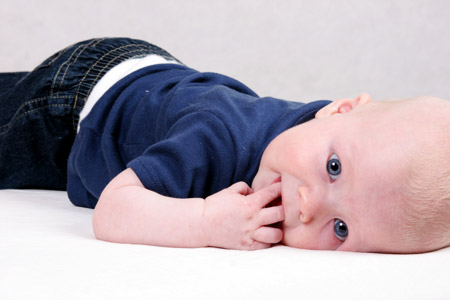 He loves his food but has moments of pickiness – though they are easily fixed by piffing whatever piece of food offends him at that very moment over his shoulder and onto the floor. He is getting too buys these days to stop for my milk during the day but can not give up his late afternoon snack, nor his early morning milk marathon so I think he’ll be breastfed for quite a while to come. He has seven teeth and is currently working on all four molars at once, which is not fun for anyone.

He chats and chats and chats, and sings too. His favourite word is ‘DUCK!’ or any of it’s related words – ‘duck’em duck’em duck’em and ‘quack quack’. He can also say ‘Mamma’, ‘Bubba’, ‘Dadda’, ‘taa’ and ‘dat’ though usually not in context and ‘Nah nah nah!’ which we are fairly sure means ‘no bloom’in way’.

He gives cuddles by head butting you – though the intention is to put his head on your chest for a cuddle it often means you come off second best if you are not watching where his head is heading! He gives kisses saying ‘mwah!’ and if you are not careful will lick or zuburt any bit of bare skin, or worse sink his teeth in. He often uses his teeth as a third hand, gripping the couch with both hands and his teeth to drag himself up, and often doing the same on your leg or shoulder! 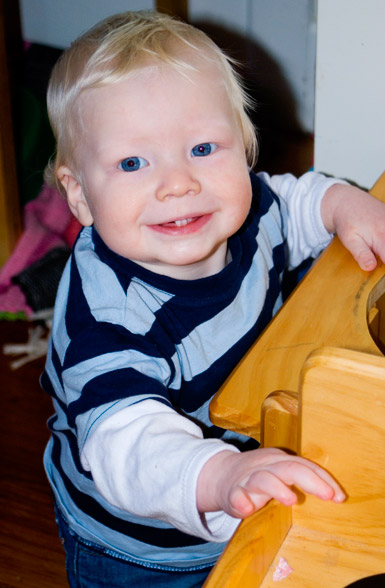 So today my little man is one. He is still sick (though better than he was for his party on Sunday) so we are just having a quiet day today. In a minute we will head over to visit his girlfriend to share the germs… oops.. I mean love and a maybe a bit of cake too. It seems to crazy that he is one, yet so normal as well…. first year over.. so many more awesome years to come!

Oh and by the way – I do know that it is Wednesday, I just couldn’t possibly be wordless today, heck I had enough trouble keeping myself from writing even more ramble!!