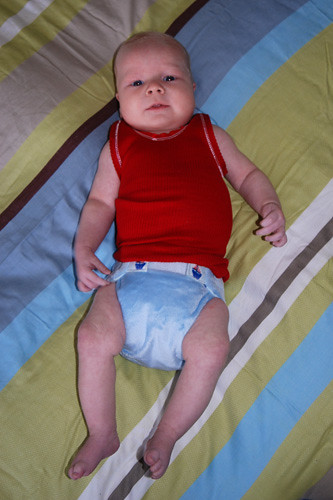 When do you stop measuring a baby’s age in weeks and start using months? I am never quite sure if I should tell people Muski is 12 weeks old (almost 13) or almost 3 months? Which sounds older do you think? Because if I make him seem older people might not freak out so much about his size!

So this is not the greatest photo but it is one of the few of late where he is not red and flaky so I am going with it. I think it does show how long he is. My giant baby!

So in eight weeks he had grown more than 10cms…. does that sound like a lot??

He was 4.62kgs at birth (10 pounds 3 oz) and at eight weeks he was 5.82kgs. To me that doesn’t sound like a really huge weight gain in eight weeks but it seems like a big growth in length?

I am so not used to ‘normal’ sized babies. The girls were not as heavy as Muski is now until they were almost one. Muski was wearing clothes at 8 weeks that they wore at 11 months, so there is just no comparison!

When we were in hospital with Zoe the number of people who would look into the pram and ask how old he was and then exclaim how HUGE he was just cracked me up! In one breath they’d say how skinny Zoe was and then how huge he was. It seems like I never do things the boring normal way – first I have teeny tiny babies really early and then, not to be outdone, I have a huge baby a bit late! At least life is never boring.

Muski is a pretty cruisey young man. He loves to chat and will go on and on if someone will sit and talk back to him. He giggles in his sleep just like his sisters did when they were little. Actually the girls still do that. While we were in hospital I woke up to hear Zoe giggling in her bed and Muski giggles in the pram at the foot of her bed… they must have been having the same good dreams!

He doesn’t cry much, only when he is angry about something, and then he roars! He mostly just grunts to get my attention. He has recently discovered the joy of spit bubbles and has almost mastered the intentional raspberry. He’s trying hard to sit up, though he is still working on having head control 100% of the time. He can also roll from his back onto one side and almost the whole way over… I think it is just what happens when he kicks about rather than intentional… how old are babies when they roll? I have forgotten all of this stuff, plus the girls were behind on all of those mile stones.

He loves to have a ‘free day’ and kick around with no pants on. It’s taken me a while to come to terms with his fountain abilities though. A little while ago he was lying on his rug kicking away and trying to make his arms reach for the toys, all happy and chatty. I’d put a really big towel under him so figured we’d catch any wee without any dramas. I pottered about doing ‘stuff’ came back a few minutes later to find a puddle on the floor over near the couch. I asked the girls who had wee’ed on the floor and could they please clean it up (yep the girls still make puddles… don’t ask!). They both blamed Muski…. I got a little cross at them for blaming their baby brother just so they didn’t have to clean up, but they still insisted it was him.

A few days later I walked in just as the fountain started and suddenly realised the girls had been telling the truth! Fountain boy has this clever ability to pee straight up and out in a perfect arc, leaving a big puddle far away from where he is lying and not a drop near by to give a clue as to who the real culprit is. Amazing – he is already getting his sisters in trouble!

He’s eating really well…. though some days (and nights) I feel completely drained – literally. It is certainly much easier to feed one baby, and to not have the dreaded shields to contend with. We have almost mastered a decent cradle hold and feeding in public but he still is an on again off again feeder in this position which drives me nuts.

He has days where he power chucks a lot… though thankfully it doesn’t seem to bother him as much as it did his sister so I am crossing my fingers he is one of those ‘fat happy chuckers’ our pead talked about.

His skin is awful at times… very dry and flaky and red and itchy looking in all the classic eczema places. He doesn’t seem too bothered by it but I am. So we are greasing him up a few times a day and trying to find something to bath him in that won’t dry him out… so far the oats are doing the trick. I am also going to try cutting back on dairy…

I can’t cut it out all together or I may die (ok yeah that is melodramatic but if you knew how HUNGRY I was and how much I crave cold glasses of milk you’d understand) but he was so good while we were in hospital -slept well, chucked less, nice skin despite being in that dry air conditioned place with no greasing up – then as soon as we came home his skin got really bad, he had some huge spews and some really unsettled nights. It made me think about what was different and one big thing was the milk… I came home after 5 days without any milk and pretty much no other obvious dairy and pigged out… HUGE glasses of milk, heaps of cheese, yoghurt and custard… mmmmm…. I am hungry just thinking about it…

So I figure it can’t hurt to try cutting back a bit… I am just going to stop the milk and cut back on the other obvious dairy – I still need to be able to eat cheese in cooking (we eat a lot of cheesey things YUM!) and the odd dairy based desert (ooooh my Mum made this totally kitch and very tacky trifle thing with crushed biscuits and custard and jelly… drooool!) and I am not going to worry about all the hidden dairy in processed foods… so you are probably all sitting there thinking why bother at all… but will see how we go and if it helps it helps.. if not.. bring on the milk!

So that is the boy in a nutshell. He is a very happy little chappy and everyone loves him… especially his sisters. Ah… it is so nice having one, laid back, bubba to enjoy!