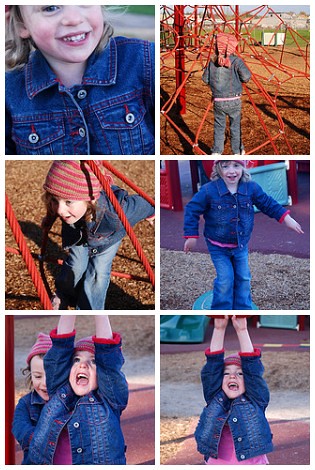 We had a quick visit to the new Adventure playground in Gisborne yesterday.. or gRisborne as the girls say.

The new park is pretty groovey I have say! It has lots of cool things to muck around with the girls were most impressed. It is also set in a really nice part of the park lands that run along beside the creek. Despite being behind Coles and next to some building sites at present it is also surrounded by big old trees and lots of grass. The botanic gardens is just up the path one way and in the other direction you walk under the main street and along the creek to the other playground. There are a few picnic tables around the park area, but sadly no new toilets. I think there are toilets reasonably close in both directions but with two small children in tow we’d never make it in time!

Still we had a lovely play and it will be an awesome place to spend time when the weather warms up some in a few months! I think the girls were most impressed by the ‘spider web’ climbing thingy despite not quite being able to master much climbing on it. Oh and the flying foxes because they have them at three heights.. the lowest of which is just perfect for the girls to reach on their own and push each other across. Oh plus the usual plethora of sliding and swinging, a very cool ‘surf board’ and ‘merry go round’ and lots of other little bits and pieces to explore. Well worth the trip if you are in the area.

It was a little bit dark for too many good photos, being late arvo and a kind of gloomy day but I had a bit of a play with the new camera anyway. Still trying to figure out how to get it to focus on the spots I want it to… really should have taken the manual with me!