Muski is finally talking and we all heave a great sigh of relief at the lowering of frustration that the words bring. 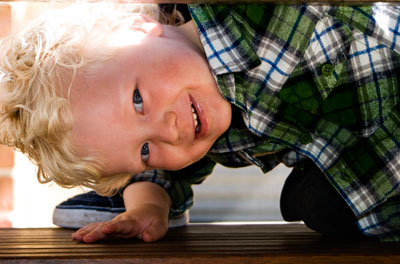 He’s still not the most verbose almost-two year-old out there, but he’s got most of the useful words down – like ‘me’ and ‘mine’. Today I got a ‘my turn’, which was most impressive.

He’s got some important names figured out… He can say Mama and Dad Dad and Nanny and Bobo (grandfather) and WoWo (Willow – his friend) and Isshy (Izzy)…. but he can’t say Zoe, or he just doesn’t say Zoe… I’m not sure which.

Unlike lots of kids his age he’s not really a parrot. He’s just not into the ‘I say x, you say x’ game. If you ask him ‘Can you say X? Say X’ he usually replies with a simple ‘nup’. Sometimes however, he manages to hear, remember and repeat quite capably.

He can say ‘bugger’…. and says with great inflection while looking around for an audience.

He can also squeal with the exact same pitch as Izzy when she is chucking a tantie and stamp his foot and say no just like Zoe does when she is cracking the sads.

No, he is no parrot, but sometimes it seems he is a mirror for all our bad habits

Home » Not a parrot, a mirror.