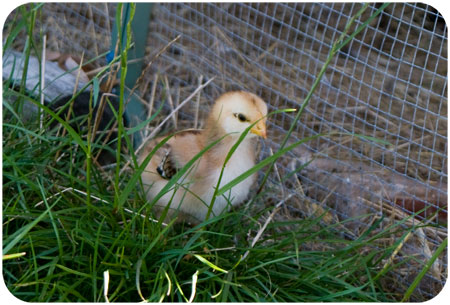 That cute little bundle of fluff is ‘Dot’, so named by the girls to match up with his/her older sister, Dash. She hatched about a week ago and is being clucked over by her doting surrogate mother, Jasmine, our little Wyandotte Bantam.

This is the second hatchling for Jasmine (Dash was her first). Neither of her hatchlings are actually her chicks. They are fathered by our big, black, gentle, rooster, Hamlet and their mothers are one of the old Isa Brown refugees we inherited a long time ago – we have no idea which ones. Sadly for Jasmine none of her eggs ever seem to be fertile, I think she is just too small for such a handsome but huge rooster.

Jasmine is a fabulous mother, except for one thing, she only ever hatches one chick. This time around we had two eggs that were definitely fertile, last time there were three, but as soon as one egg hatches Jasmine gets up and leaves the others to the cold. I’m sure it’s not her fault. I think her timing is confused because they are not her eggs. We popped them under her a few days after she’d laid her clutch, when we first noticed she’d gone clucky and I think that throws her off.

Still one chick is better than none since the refugee girls are old and have stopped laying again. Marshmellow (our white silky bantam fluff ball) is also sitting on eggs (also not hers), though I am not certain either of them are fertile.

So perhaps we’ll be building up our laying flock one chick at a time… provided they don’t turn out top be boys!