We live in an old house. Have I said that before? Oh yes, only about twenty times, but really it is important when it comes to keeping the place clean and organised because, well, it makes it that much harder.

This house is old and it has no storage. We have on ‘linen cupboard’ in the bathroom that I am guessing the old hot water service used to live in, back in the good old days when this house lived in suburban Melbourne (it was shifted up here about three years before we bought it). The cupboard is not tiny but it is not huge and it has only two rickety old tacked in shelves and really not that much useful storage space – but it is all we have and it was desperately in need of a clean out. 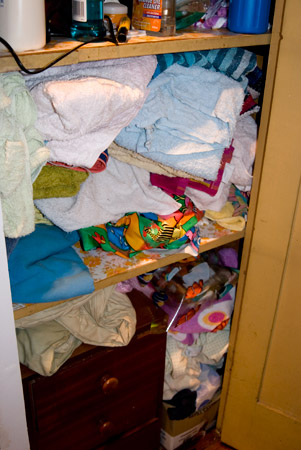 Yes I am openly confessing that this was how incredibly messy our linen cupboard was. I just shoved clean towels in anywhere they could fit, not to mention bed linen and other bathroom ‘stuff’. The towels were just over flowing and really how many towels does one family need anyway? So that was main goal for the morning, to cull the towel stash and try to tidy up the rest of the things. 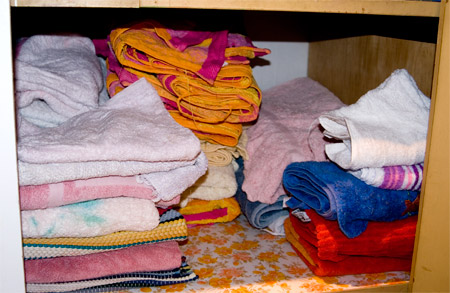 I got rid of a huge bag full of towels that will go to the op shop (thrift/charity store if you are not an Aussie) and packed up the queen sized doona and doona covers to store away (we have a king sized doona on our queen bed now.. bliss!).

I still need to organise the ‘bathroom stuff’ shelf and I contemplated going out and buying some baskets to sort all the little bits and pieces into, but I am living in hope that we will begin renovations in the next six months so it seems a little silly to spend money on something that will be ripped out soon enough.

I also need to organise the bed linen a bit better – I saw a tip on Better Homes and Gardens the other week to store your sets of bed linen all inside one pillow case, so the matching doona cover, sheets and pillow cases all inside one of the pillow cases and on the shelf, which seems like a very clever idea as I can never figure out which fitted sheet is double, and which is queen sized when I need one!

So yes, my linen cupboard is still far from perfectly organised, but at least we can get the towels out now and see where the last roll of toilet paper is hiding, and I think that will do for now, a quick and easy project to get me back into a little organisation while I dream and plan for my new bathrooms (yes plural!) and all the household storage I am going to have!