The other day Muski insisted on wearing two fleece hats and a sunhat inside all morning. I did suggest that his head might get a tad hot and sweaty with three hats on, but he wasn’t listening and it wasn’t worth the battle so I let it go. About an hour later he lept off the couch and landed head first on the corner of his wooden tool box.

I saw head meet tool box and I blessed the stubborn streak in my boy as I felt sure those three hats saved him from a split head and a trip to the Drs.

This afternoon he wasn’t wearing any hats. 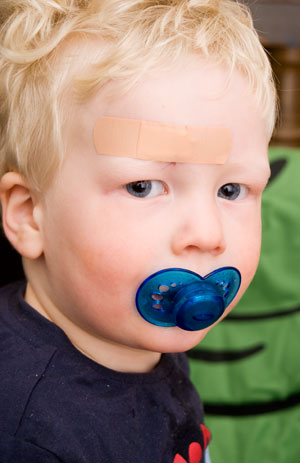 He fell off a kiddy camp chair and hit his head on the corner of a wooden box, splitting it open right where his eyebrow meets the bridge of his nose. There was a lot of blood and quite a bit of crying but not nearly as much crying as when we held him down to stitch it back together.

Three stitches, a whopping big band aid and some panadol later he’s fine, as long as no one even looks like they might want to breath near his head. Then you get a stern “Nooooo OUCH HEAD!”