We finally got our seeds yesterday, along with some peat pots, a big bag of seed raising mix, an even bigger back of gypsum, a trip to the creak and a sore nose….

Firstly the sore nose… We were on our way out the door to go to the ‘planting shop with the fish’ (nursery) when Izzy didn’t quite manage the front steps in her ‘moo boots’ (gumboots) and did a spectacular fall down the steps landing face first at the bottom! Below you see the most major injury, a scraped up nose.. which actually looks a lot worse today now that it has scabbed up and swollen a little but she says it doesn’t hurt.

Izzy was pretty upset by the event, crying in my arms, as you would expect… but when I dared to suggest that she had stumbled in her gumboots and that had caused the fall she stopped immediately to tell me “no Mamma, you just should have carried me down the steps, then I’d be ok!” I guess I have been told! 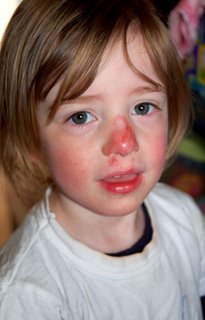 So we went to the creek on the way to the nursery… hoping to feed some of the feral ducks, and hoping to take a little someone’s mind of her sore nose. No ducks.. but a bit of a paddle in the gumboots helped a lot. Then on to the nursery, where, apparently their toys are much better then ours cause they didn’t want to go home! I on the other hand was more than ready to get out of there after picking up the stuff we needed cause I was getting a bit antsy about the comments regarding the nose injury.. starting to wonder if people thought I might have pushed her down the stairs by the way she would reply ‘Mamma made me fall down the stairs!’

So when we got home we discovered the red card from the post office to say our seeds etc where here.. YAY! About time too! We had lunch and a sleep and then headed off to get the package . 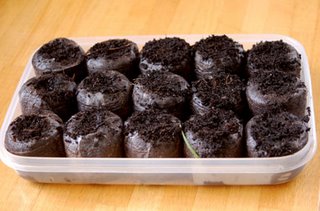 These are our magic peat pots with watermelon, ‘Antelope’ (cantelope), pumpkin, zucchini and cucumber.. three of each. Done in these magic pots so that we can plant the whole thing as these plants are all susceptible to transplant shock (ha ha ha listen to me the real expert!) 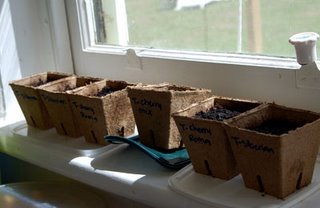 These are tomatoes.. again done in magic pots that we can plant the whole thing if we want to… I put in four different varieties of tomatoes and three pots of each so if they all do well (last year we had tomatoes but not until too late so most didn’t ripen) 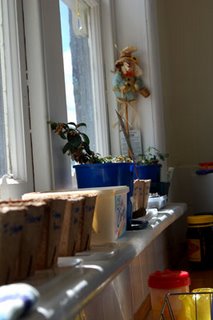 The rest of the window sill has still more tomatoes, some tri-coloured silver beat and the two blueberry plants we are hoping to find a spot in the new veggie garden for!

We planted these all inside to try and get a head start and get things going while it is really still too cold for them outside. We are still having some major frosts so it will be a while before anything can be planted outside which leaves us with a very short growing season. We are also not planning on planting any of these out until just a touch late.. until after we come back from holidays, because we have no one to water them. So these seedlings will all take a trip over to my Mum’s place for some TLC while we are away and then go into the ground after that… and fingers crossed we will do at least as well if not better than last year!

We hope to do heaps better as we have doubled the size of the veggie garden this year… well we will have when it is finished, only two more beds to go. We have also learnt some lessons from last year and hopefully can improve things from that. We still have lots of other things we want to put in, both seeds and a handful of seedlings we are hoping to get, plus I still need to put the potatoes in.. just still a bit frost wary… but hopefully in the next week or two….

We are also hoping for baby chicks this year… Red the Randy Rooster has been doing his part for the past 4 months so it is up to the girls now to decide to sit for a bit… so fingers crossed!

Home » Planting seeds and other accidents…