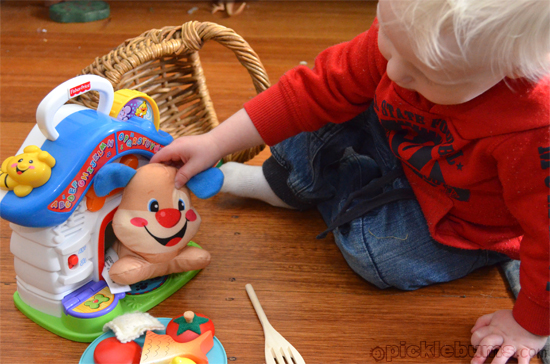 Children need the freedom and time to play. Play is not a luxury. Play is a necessity.
-Kay Redfield Jamison

I am a firm believer in the importance of play.

Play is how children learn, it’s how they learn everything.

Right now Noey is learning so fast I can barely keep up with him. Watching him play is like watching his brain grow right before my eyes.

His vocabulary is increasing at a rate of knots. He will have a go at repeating just about anything he hears, he uses new words all the time, and some of them are even understandable.

Animal sounds are a new found skill. Did you know that a dog sounds much like a steam train in our house? “Wooo-woooooooooooooooo!” 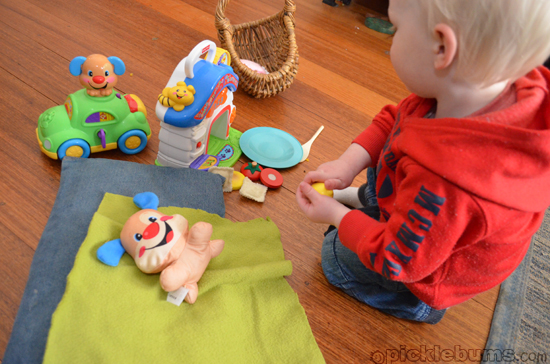 He is also very interested in cause and effect…. “If I do this… what will happen?”

“If I press this button will something happen?”

“If I throw this block at my brother will he yell at me?” 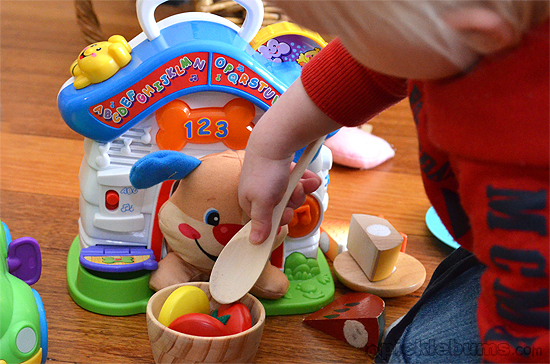 His imagination is developing more and more and pretend play is becoming much more important in his play.

He wants to play at cooking, at putting the puppy to bed, at feeding the puppy… Often all the things that we still help him do, he wants to help his toys do. 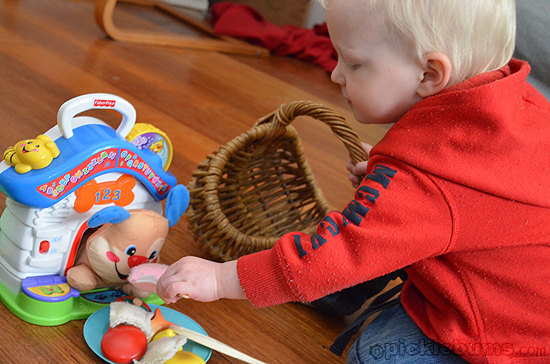 He is learning about himself and interacting with others.

He has learned the power of the word “Mine” and uses it often!

When you are almost two, playing is not just important… it’s essential.

When we got the Fisher Price Puppy Learning Car and Puppy Play House the first thing Noah said was “Mine!”, closely followed by lots of “wooo-woooooooo!”

The big kids were quite taken by the toys too and wanted to find out what every button and flap did, but Noey was quite clear it was his and he would show them how to play with it… and so he did.

These toys ticks all the boxes for Noah – lots of words he can repeat, lots of buttons to push, and a doggy to feed, and wrap up and put safely back in his house. 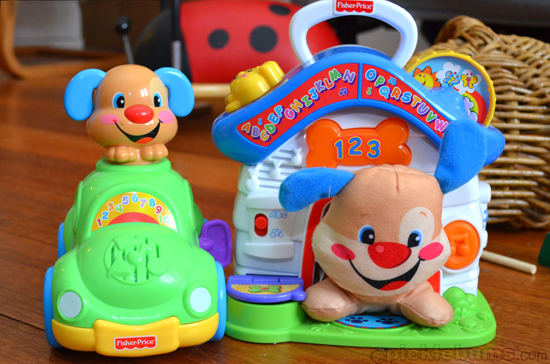 This competition is now closed. Winners will be notified soon.

If you know a small person who’d like a Fisher Price Puppy Learning Car or a Puppy Play House then you’re in luck as I have one of each to give away!

To win just leave a comment on this post telling me the funniest thing your toddler (or a toddler you know) says at the moment. Do doggys say “wooo-wooooo” in your house too? Is everything “mine”? Or is there some other hilarious miss-speak going on? The two cutest, funniest, most adorable answers as judged by Nuffnang will win a Puppy Learning Car or a One Puppy Play House.

Entries close 5pm AEST June 27th – You must be an Australian resident to enter and complete terms and conditions can be found here.

{Disclosure: this is a paid post sponsored by Nuffnang. We received a Puppy Learning Car and Puppy Play House to review for this post. Opinions expressed in this post are purely my own, and those of my children.}