Sometimes people over step a child’s boundaries and expect physical affection, even when the child clearly isn’t comfortable with that. Usually there is no intent to be disrespectful, but sticking up for your child’s right to say not to hugs and kisses is an important lesson for everyone. 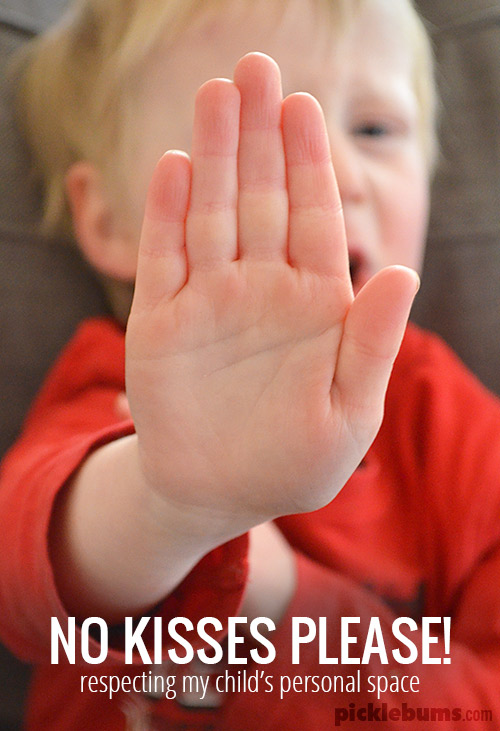 He has never been a touchy feely kind of kid.

As a toddler he pushed away as often as he reached out, as a school kid he doles out his hugs fiercely, but selectively, and he has never liked kisses.

He and I have an inside joke about ‘cow kisses’ and every once in awhile he’ll let me give him one, if he’s in a playful mood. But he isn’t often in the mood, not even for his mother’s kisses, and I respect that.

It’s something others sometimes find hard to understand, especially when he was younger and he hadn’t perfected his death stare yet.

The requests would come from mostly from relations, often in the form of teasing, or joking, but also often being said again and again, and with mock sadness or anger when my child refused physical contact, or became upset and confused about the interaction.

I know the requests are made with bags of love, I know there is no intent to be disrespectful or make anyone uncomfortable, and I know there are some deep-ceded generational ideas and expectations, but it makes my child feel pressured and uncomfortable, confused, and frustrated.

I’ve always taught him to simply say ‘no thanks, I don’t like kisses’. Or I’ve said it for him if he wasn’t able to.

Now that he is older, I suggest that he could offer some other form of affection if he is comfortable with that, a handshake, or a high five and a big smile. We try to explain in a polite manner and then move on. Often that is enough, but sometimes people still persist.

I know they love him, but it is still not ok.

When a child clearly states that they do not want to be touched, hugged, or kissed, I expect adults to respect that.

I want my children to know that ‘no means no’. I want them to understand consent, to seek it, respect it, and expect it in return.

I want them to know that when they say ‘no’ to being touched, others should respect it. I also want my children to learn that when someone else says ‘no’, they need to respect that too, no questions asked, even if they don’t want to. I especially want to raise men who understand consent and this is where that learning begins.

I want my children to know that it is good to listen to their inner voice, and that it is ok to speak out, and say when things make them feel uncomfortable.

I want my children to know that they have control over their own bodies, and they get to say who can and can’t touch them.

It is hard to teach these things to my children when some adults, even with the best of intentions, and certainly not meaning to, send the opposite message.

So please, when a child says ‘no kisses!’ or ‘I don’t want to hug today’, or even just turns their head away… please don’t take it personally. It’s not that they don’t love you, it’s just that they have a right to their personal space, and no means no whether you are 2, 6, 26, or 62.

Please respect a child’s personal boundaries just as you would with another adult.

Are your kids into hugs and kisses, or not so much?

How do you handle this often tricky situation?