A while back I offered myself up on the rack for you all. I told you to ‘ask me anything‘ and you did!

Quite a few of you asked questions along the lines of ‘How do you find the time?‘ or ‘How did you fit in blogging with everything else you have to do?‘ So today I thought I might share what a typical day at the Pickle Farm is like… which might explain how I find the time, or fit everything in…. or not!

Before I launch into our yesterday, I should point out that there is no such thing as a ‘typical’ day around here. No two Fridays are ever the same, but this gives you a glimpse into the daily insanity that is my life…

7:26am
I am awake 4 minutes before I need to be. I never set an alarm because I always manage to wake up a few minutes before the thing would go off anyway. But I don’t have a snooze button, so as long as I don’t roll over and try and get in those last 4 minutes sleep (which would result in me waking up 20 minutes later) it’s all good.

I drag myself out of bed and stumble around in the murkiness looking for semi-clean clothes without waking Noah. Of course that doesn’t work… he wakes so I send him in to wake up his sisters.

8:30am
School mornings are bedlam in our house, but I have discovered that waking up earlier doesn’t help much, it just prolongs the chaos, so I have it down to a fine art. I can get myself and four kids up, dressed, fed, brushed, packed and in the car in an hour. Today however, there is no kinder and no where else we have to be, so the boys go to school drop off in their PJs.

9:05am
I love the mornings when we get to school right on 8:45 and are home again just as the bell rings at 9am. It doesn’t happen often, but it makes me feel like I have achieved something before the day even begins. Mind you, I still haven’t eaten breakfast or gotten the boys dressed. 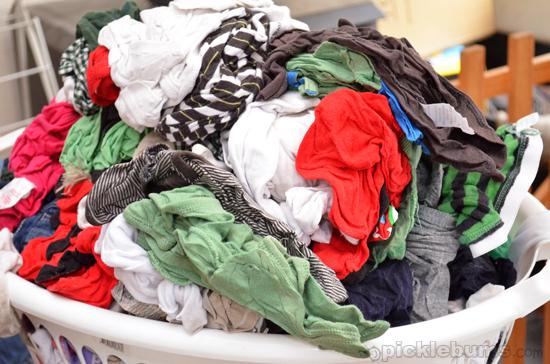 I dress Noey and eat a huge bowl of cornflakes while Morgan gets dressed then I tackle the endless piles of washing.

It has been raining here for the entire week and even though it’s not that cold I light the fire so I can hang a load of washing on the racks above it and get it dry by the evening. 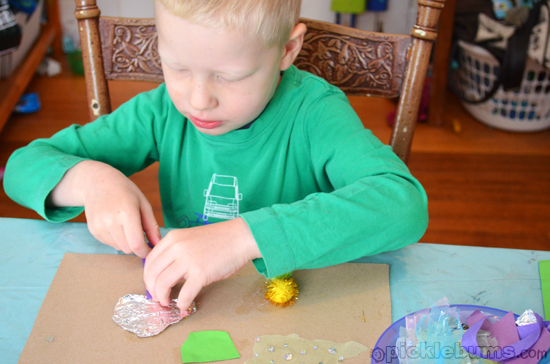 Morgan does some collage and Noey entertains himself by trying to pick up big pom poms with some tongs…. 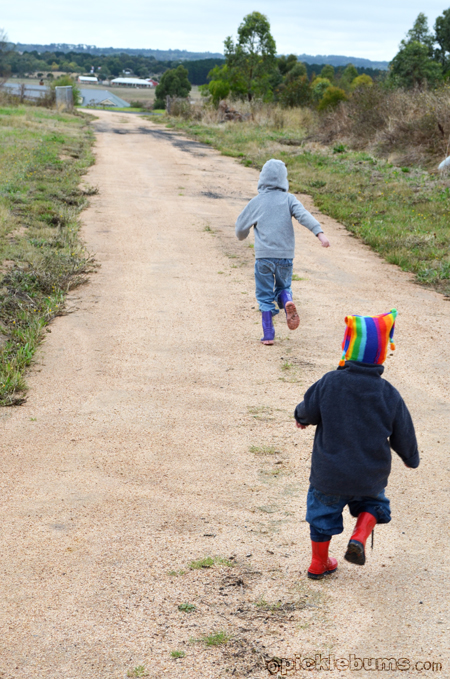 The rain stops so we go outside to look for frogs. We can hear them but of course we can’t see any frogs, but do we see a Black Shouldered Kite (at least we think that is what it is) swoop down into the paddock and fly off with something in it’s talons which is rather exciting. It starts to rain again so we come in.

10:30am
I feed the boys a snack and sneak a few moments on my phone, checking twitter and my facebook page.
I can’t put off my most hated task any longer so I sit and fold washing while the boys play. Morgan helps me put some of it away, and collect another basket full to put in the machine.
I also empty the dishwasher (which is really the girls’ job), tidy up in the kitchen and clean the bathroom… it’s a laugh a minute round here folks.

11:30 am
The Father Figure comes in from where he’s been hiding, pretending to work on the new bathroom, and announces he has to go to the hardware shop. He takes Morgan with him.
I turn on the PC and check some emails, and see if I can get Noey to have an early sleep. He’s not interested so I muck around taking some silly photos of wooden fruit (#marchphotoaday) while Noey loads things in and out of his toy stove.

12:30pm
We have steamed dim sims for lunch, and I announce the fact on twitter (as you do) and am vindicated to see Glowless tell me they are a totally healthy lunch option. I try again to get Noey to go to sleep but it’s not happening, so I hold him down while his Dad puts a clean dressing on the finger he sliced the day before.

1:30pm
Morgan is out the back ‘helping’ with the plastering. Noey is pottering around beside me as I write a blog post, finish an article, search for a photo for the article and put the finishing touches on my new media kit. I am almost done when I realise it is 3:05 already.

I race around finding shoes for Noey while Morgan ums and ahs about whether he will come to school or not. Finally the fact that it has stopped raining and he is likely to see some kinder friends gets him in the car. 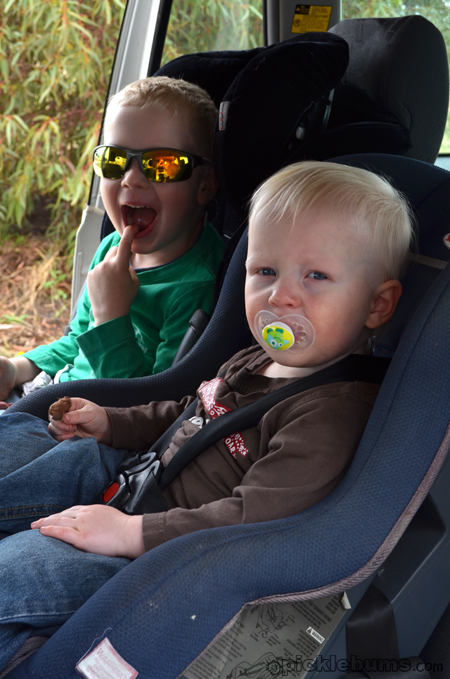 3:25pm
Of Course Noey falls asleep in the car on the way to school and I spend 5 minutes trying to renege on my deal with Morgan, but I feel bad so haul the sleeping toddler out of the car and stand with the other mums waiting for the bell to ring. It is worth it to see Morgan racing around with his friends…
Noey wakes as the school kids are dismissed from assembly and join us on the equipment, we stay and play and chat for a few minutes then head home.

4:00pm
Everyone is starving so they eat, change out of their school uniforms (but not without a fight) and cuddle the Guinea Pigs for a while. 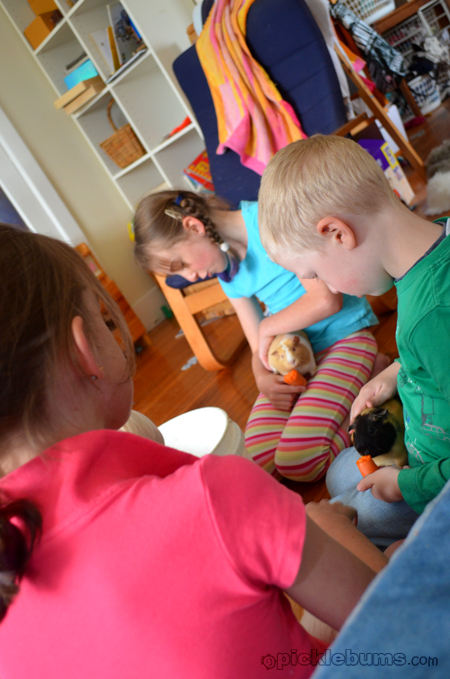 They’ve barely been outside all week so we go out the back and I choose to ignore the fact that the big kids climb to the very top of a smallish tree. Noey gets wet in the HUGE puddles so I bring him inside and we enjoy some peace and quiet. I have no idea what the big kids are getting up to outside but heir father can see them so it’s not my problem. Noey potters around, happily playing, so I finish off my media kit and publish my blog post.

6:00pm
I loathe to drag the big kids inside, but ten minutes sleep in the car is not enough and I know Noey needs to eat dinner sooner rather than later. I run the bath and the big kids get in while I cook dinner.

6:30pm
We are having super slack easy dinner tonight. It’s Friday and The Father Figure has gone out to his weekly ‘play date’ and when they ask, I tell them they can eat their toasted sandwiches and salad in front of a movie… if… if they can all agree on one. Much negotiation, arguments and some bribery ensues and finally they settle on 4 episodes of the Muppets.

7:15pm
Noey only makes it half way through the second episode before he is falling asleep in his dinner so I take him off to bed.

8:00pm
Thankfully Noey falls asleep quickly and easily (for a change) so I catch the end of the Muppets and pack everyone else off to bed and clean up.

8:15pm
Morgan complains of a sore stomach. I give him a drink and he is out like a light.

8:30pm
I plan to have a shower but he girls are fighting over something rediculous so I step in and lay down the law… then I do it again five minutes later and again, until there is eventually peace. I still have time for a quick shower before my planned chat with a blogging friend.

9:00pm
I step out of the shower and hear someone crying. I assume it is Noey so get dried and dressed quickly and go in to re-settle him. But it is Morgan and he is howling like a wounded beast, complaining of a sore stomach.

I shift him to the couch in the hope he won’t wake up the whole house and offer water, ice blocks, DVDs, hot packs, even lollies but he cries solidly for over and hour, obviously in pain. For the fourth time this week I contemplate whether I need to make a trip to the hospital as I cancel my chat.

As a last resort I give him some panadol, put on some Play School and settle in to rub his back. He stops crying and eventually falls asleep.

11:30pm
I carry my sleeping boy back to his bed and cross everything that whatever was bothering him is gone for the night and I crawl into bed. I contemplate reading, or working on an overdue guest post, or even seeing if my chat buddy is still up… but all the crying has taken it out of me so instead, I do the practical thing, and choose sleep.

So there you have it, a not so typical day at the Pickle Farm. I’m not sure if it answers the question of ‘how I find the time’ because quite honestly I just don’t. I always have an overflowing to do list which matches my overflowing laundry baskets… but such is life!

What are your days like? Are they as crazy as mine?

You can still ask me a question if you like… either pop over to this post and leave your question in the comments, or email me. I’ll do my best to answer each question…. eventually!