There is a lot going on around me at the moment – some good, some not so good – but I’ve decided to put that aside tonight and tell you all a little story…..

A while back I blogged about going to the local market and buying a red Quan Yin statue and how Quan Yin is sort of significant to me and especially my girls. Sif asked for a photo and lots of you have asked me to tell my Quan Yin story so here it is…. 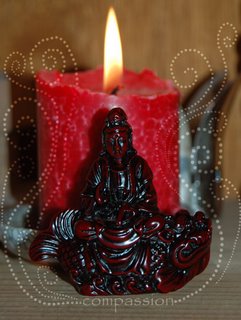 ‘Kuan Yin (also known as Kwan Yin or Quan Yin) is one of the most beloved of Deities in the Chinese Buddhist tradition known as Mahayana (“Great Vehicle”). As “Kuan” means Earth and “Yin” is the dynamic female life force, Kuan Yin is honoured as the Holy Mother of compassion and mercy. She is also said to personify “karuna”, boundless compassion, and that her strength, like silk, is disguised in softness.’ (read more here)

We were trying to get pregnant… we’d not been trying very long, only two cycles, but of course I was impatient. I’d finally made the decisions to have a baby and I wanted it to happen NOW!

Our third cycle came and went but no sign of my period. Five days over due and three negative pregnancy tests and I was a tad annoyed. Fine – if I was not pregnant hurry up and let me bleed so we could start over again…. and for goodness sake don’t muck around with my perfect 31 days cycles just when I thought I had it figured out when everything needed to happen! To add to all that I had this nagging worry that perhaps I couldn’t even get pregnant after a few issues when I was younger… was I fertile at all?

That week Si got his new truck and I suggested we take the truck for a drive to Hanging Rock on the weekend. I sort of had an ulterior motive for suggesting it but thought it way too silly to tell Si why to begin with. You see I’d been reading some stuff on line about Quan Yin and I’d been enthralled by what I read.

Her compassion is what struck me first. ‘True compassion for all things’ – it is a philosophy that I admire greatly but struggle with a lot. I was also struck by how she links into so many cultures and religions – she is said to be the like virgin Mary in catholic faith and she seems to pop up with many names all over the place, and that idea – that all religions are some how interconnected into a whole higher level of consciousness- really appeals to me. She is also the patroness of mothers… and that surely peeked my interest considering how all consuming trying to conceive had become.

So I read lots of things and came across this…

“Another way of connecting with Kuan Yin is through the healing power that can be found in nature. The next time you feel overwhelmed with worries, spend some time in nature. This could be in the privacy of your own backyard, in the local botanical gardens, or even in some forest glade (if one is handy to you). An ideal place would also include a body of water, such as a stream or lake, but if this is not possible, chose a place that is simply beautiful and serene, and most importantly, where you can be undisturbed by others. Take with you a small offering of fruit, or a flower, for the Goddess.

When you reach your destination, take some time to walk around. This simple act of walking suggests the passage of time. As time passes, so will your problems. Then when you are ready, sit and unburden yourself to Kuan Yin. State aloud what is bothering you and why. She will understand, the compassionate Goddess that she is. Take your time. Remember also that the act of chanting Kuan Yin’s name aloud is believed to bring peace to even the most troubled of hearts.

Close your eyes and visualise Kuan Yin radiating love from her heart out to you. She shows you how to take the world from your shoulders, and hold it in your hands. See the Earth’s water rippling, the leaves in the trees gracefully moving in the breeze, and the birds soaring without effort, taking with them your problems.

When you have finished, leave the Goddess your offering – and thank her for her help. As you return to your normal life, remember that Kuan Yin’s presence will be with your always. Whenever you see soaring birds, the rustling leaves, the rippling waters, use these triggers as a reminder to take the world off your shoulders.”

And feeling so much in limbo – not knowing if I was pregnant or even if I could get pregnant and wanting so much to just have this all over and done with, I got it in my head to climb hanging rock with an offering to Quan Yin. So I grabbed an orange – since that was the only thing we had around, and stashed it in my coat pocket and we set off.. I even confessed to the orange and my plan on the way there, and as usual Si just smiled and went along with my looniness.

When we got there, despite being windy and freezing we walked up the track to the top of Hanging rock. The good thing about the weather was that there was practically no one else around… we had the whole place to ourselves. I picked a spot out on a rock looking out over to the north (away from Melbourne). The view was awesome. We sat for a while then Si wandered off for a look around, leaving me with my orange.

So this was it… now was my chance to ask Quan Yin for what I wanted and leave my offering.

So, despite feeling a bit silly, I said out loud…. “I just want to be fertile”

That was a bit of a mistake…but I didn’t know it at the time.

So I sat for a while longer with the thought hanging in the air, out over country Victoria somewhere, and then, when things seemed calm, I left my orange, found Si and we went home.

The next morning was freezing when we woke up… still no period despite some nagging crampiness. Si told me to do that last pregnancy test as ‘you never know’…. so off I went, froze my bum off for yet another negative result. A while later over breakfast my digbat of a husband had to go dig the test out of the rubbish to look at it ‘just to see how it works’ (why he couldn’t have had a look before I peed on it I don’t know!) and he brings it to me and asks ‘so this is the control line but what is this other faint line for?’.

At first I was very excited but then I dismissed it. I was certain the line had not been there after the prescribed time and not even there after an extra ten minutes so it was most likely only showing up now hours later and meant nothing. But Si, ever the chemist, wondering about how it worked suggested it might have taken a while to show up because it was really cold… that some chemical reactions are hindered because of the cold. So he convinced me I should go buy another test and try again when it was warmer. I did protest that it was supposed to be ‘first morning urine’ because the hormones would be more concentrated but he told me just to not pee for a few hours!

So after lunch, after hanging on for a while, I did yet another test. Seven days late for my period, middle of the day, much warmer now and I got a faint… very faint line almost instantly! Oh My God… or I should say Goddess!

I had hurled more in that week than I had in my whole entire life and was having these great dizzy spells that our GP put down to low blood pressure… and he strongly suggested we see an OB, even though we’d pretty much decided to go with the birth centre. But still… I felt so horrid that I thought one visit to an OB couldn’t hurt and really that was what the health insurance was for anyway. So I got a list from the GP and started to call… but I was 8 or so weeks pregnant by now and no one could fit us in.

I’d given up, and was over the whole thing. As I walked out the door to work on morning I threw the list at Si and said to call the last two guys on the list, I didn’t care who they were or how much they cost if they could see me, just make a bloody appointment! He called the first guy and got us in.

A few weeks later, at almost 12 weeks pregnant (according to my dates) we walked into our OB’s office. I knew nothing about him, but liked him straight away. He asked all the usual questions and looked at my test results then suggested a quick scan to ‘see what was happening’.

He didn’t say a word for the longest time. All I could see on the screen was grey fuzzy stuff and my heart sank. He was about to tell me I wasn’t pregnant after all… I just knew it. He stopped looked up at me very seriously and said the words that would totally rock my world….

I thought he was kidding for a split second… no way! This sort of thing didn’t happen to me. There were no twins in either of our families, let alone triplets… and I hadn’t seen a thing on the screen. NO WAY!

But yes way… our OB was sure there were two beating hearts and thought there might be a third hiding behind the top one… and he knew this because he was a multiple birth specialist. Ironic huh… after calling 10 other OBs the only one who can see us just happens to be a multiple birth specialist and we just happen to be having twins but didn’t know it!

I am not sure that I entirely believe in all this woo woo stuff… but somehow I can’t shake this feeling that it is all related to Quan Yin and that bloody orange. But one word of advice… if you ask Quan Yin for something BE SPECIFIC… if only I had known what I was in for I would never have been so blase and just asked to ‘be fertile’… I’d have asked for ‘JUST ONE BABY AT A TIME THANKS’.

But here we are two years later and Quan Yin has a special place in our house. If she bought me my girls, she has certainly looked after them and given us the most amazing gift ever. I try to remember to think of her when things get rough.

The girls have a small soap stone Quan Yin in their bed room, and now we have this red Quan Yin in our living room. I am still looking for a larger statue for inside and another for outside but I am yet to find one that really speaks to me. She is not easy to find and often just doesn’t look right to me for some reason…. so if anyone happens to spot a serene looking Quan Yin yell out!

Anyway there you go – that is the long winded version of how I conceived twins. No fancy sex positions, no fertility treatment, just a bloody orange and a stupid question!