Have you seen those signs that kids stick in the garden at their front door? 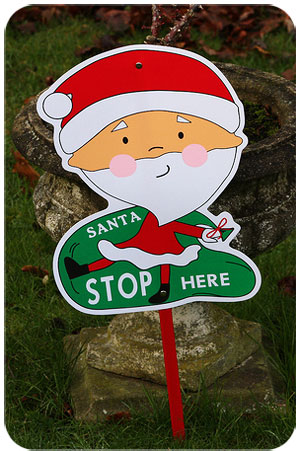 ‘Santa Stop Here’.
Well if we had one of those signs it would say ‘Santa DO NOT stop here’.

I’m not entirely sure why, but she has never liked him, not the ‘real life’ dressed up Santas and not the large noisy ‘move when you walk past’ pretend ones either.

Izzy’s not real keen on the man in the big red suit either… though unlike her sister she can be tempted in for a quick grab and run by the promise of lollies or presents. But don’t anyone suggest she might sit on his lap, or shake his hand, or even speak to him though. Why on earth would anyone do that? Especially not while your twin sister is madly trying to crawl into your mother’s clothes to get away from the abomination.

So Santa doesn’t come to our house…. but his Angels do.

As far as the girls are concerned an angel is a Christmas fairy who works for Santa and help him with ‘everything’. So here’s how it works around here at Christmas…

Izzy – Santa comes in his sled, his sled flies… do you know that?
Zoe – yeah he flies in his sled with the reindeers and when he gets here he sends his angels down.
Izzy – The angels sit on special seats on the sled.
Zoe – no they don’t have to sit on the sled cause they can fly too.
Izzy – yeah but when they get tired they sit on special seats.
Zoe – yeah… and then they fly down and give us presents while Santa stays in his sled
Izzy – ….with his reindeer.
Zoe – …and so we need to leave something for the angels to eat and something for the reindeers and Santa cause the angels will fly it back to him
Izzy – But the reindeers can’t eat while they are flying, they’ll fall out of the sky and crash
Zoe – no they won’t
Izzy – yes they will
Zoe – then maybe the reindeers can land, but not too close.
Izzy – out near the windmill that is far from us.
Zoe – yeah Santa and the reindeers can wait out near the windmill… we’ll leave their food there and the angels will fly so fast and give us out presents.
Izzy – yeah.

So that’s how it works if you happen to be afraid of Santa… just so you know.