Things that are making me smile at the moment…. 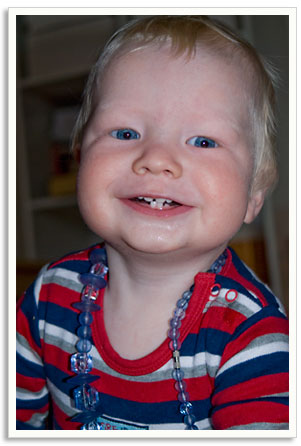 The small boy getting into the dress-ups. What a lovely mauve necklace.
Do you see the new tooth down the bottom? That makes seven!

Getting the back garden in some kind of order before the small boy’s birthday!

Sending out all the birthday invitations – mostly via email. Ok so I still have one or two that need to be snail-mailed, but I was very pleased with the animated e-vites I created and with not having to print and mail many hard copies. I am a tad paranoid that the emails didn’t get to everyone though, as I’ve hardly had any rsvps yet, so if you were invited rsvp dammit!

Finally getting my other blog up and running – lazycowdesigns.com If you are into creative things like photography, graphic designs, scrapping, especially digi scrapping, head on over and say hi. It is still early days so not much there but I started a new tradition of Flickr Fridays and there is a digi scrap freebie to download if you are into that sort of thing or if you’d like me to create an animated e-vite for your next party, or even a more traditional card or postcard go take a look. 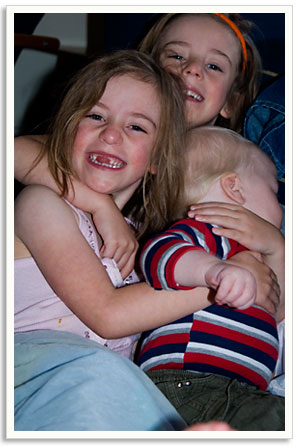 All three kids playing together!

An egg…. after months of no eggs we’ve had four in three days! Not from the new chooks (they are still a bit young) but the refugee girls must have got the wind up them, thinking they are being replaced so they’ve decided to get back into laying.. that or all the food and fancy natural cures we’ve been shoving into them has had some effect!

It’s been an up and down week here in this house, so it’s nice to take a few moments to remember the good things! You can find more Smiley Saturday stuff here at Lightening’s place!