It started with spew, then moved on to poo, then back to spew, with a lot of TV in between. That pretty much sums up the day here, so don’t read on if you don’t want to details!

It started waaaaaaay way too early for my liking as well.. with stereo spewing between about 3 and 5am. Izzy started with a massive spew all over herself and her bed. So while I stripped her off and put her in my bed so I could change the sheets etc Zoe decided it was her turn. Got them both into positions where they could spew without it meaning a major clean up and settled in for the long haul. Izzy only spewed once more and then crashed out… but Zoe managed to empty the contents of her stomach and then some over the space of two hours then also crashed out.

So at just on 5am I actually put the washing machine on!

I know.. that is just way too crazy for some who is so domestically challenged, but we were fast running out of towels and we only have two sets of bed sheets and doona covers for the girls beds so I was worried another power chuck would cause all sort of problems. So washing machine on I crawled back to bed.

Why is it that it is always on the nights that you decide you can stay up a tad late, that your kids wake in the night and need you? I mean I could have been in bed at 9:30 had I wanted to but I got chatting online (as you do) and decided I didn’t have anything on today so I could stay up till midnight… which of course sends out subliminal ques to my children to wake three short hours later!

So the morning was filled with a few more spews from poor Bizzy who is really coping the full force of whatever is upsetting them. Zoe having puked herself silly over night was as chipper as anything which only adds to the trauma since she just doesn’t get why Bizzy doesn’t want to dance to the wiggles with her!

In between spews the poos started… of course… and we watched Steve Irwin’s memorial service.. the girls enthralled by the crocodiles and me trying to catch a glimpse of my best buddy.. who I suspect was so busy organising the even that she didn’t get to sit in the crowd….. as sad as the whole thing was it really is amazing what he achieved and I have to admit I am pretty bloody proud of our Miss Tracey for taking on so many huge tasks in such a short time and really stepping up to the mark and doing better than great! We think you are ace Miss Tracey… oh and Wrinkle Carl and Jewel and Shuffles too.. not that I expect you will get a chance any time soon to relax and read this!

So in between way too many nappy changes for my liking, the odd spew from poor Bizzy and way to many watching of the playschool and Ice Age DVDs I am definitely ready for some sleep… yet here I am still wide awake…. what is with that?? 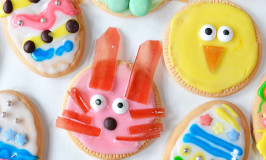