Finally we have steppage… accompanied by some major fallage. 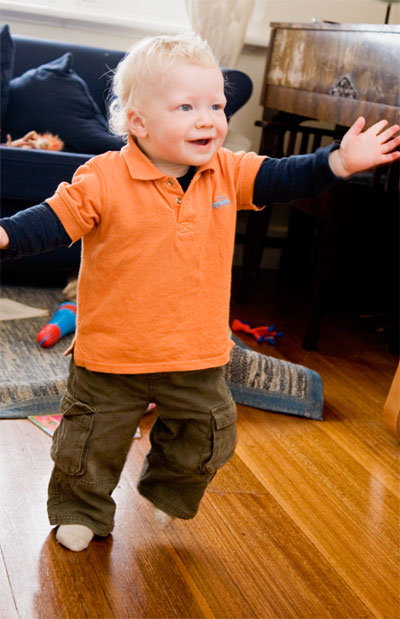 Muski took ‘his first step’ more than two months ago but after that, nothing. There has been a lot of crazed yelling and encouragement from all members of the family but that only elicited a couple of hurried steps on the way to falling into your arms, but walking, real stepping and walking, has been non-existent, until this week.

On the weekend, out of the blue, he stood and took four steps, on his own. No crazed yelling and cheering, no arms to fall towards, he just got up and walked. At the time I thought it would be another ‘one of’ and I was not prepared to believe this was actually it, that he was actually going to walk, but since then he has added more and more steps, more and more often. I think I can now officially say Muski is walking.

Muski is also climbing, and falling.

I wrote that bit about the walking this morning, but I stopped midway through the last sentence when I head ‘donk…. waaaaaaaaaaaaaaaaaaaaaa!’ and I could tell from the scream that it wasn’t good.

He only fell from one of the arm chairs this morning. A little over half his height so only a small fall, but he fell face first and gave himself a nice blood nose and shook up his brain cells a bit at the same time. When I got him right way up he looked at me, and for a fleeting moment his eyes seemed to go in different directions and he buried his bloodied face in my chest and promptly went to sleep. uh oh… that is not good.

Thankfully when I started yelling at the girls to hurry up and get dressed, thinking we might need to make a dash from some medical attention and not wanting to advertise to the world that my four year olds were still in their PJs at 11am, he immediately came good and cried and pointed at the shelf where we hide his dummy. I figured if he was with it enough to remember where I’d put his dummy and to point at it and make his ‘I want that’ grunt he was probably ok.

Mind you this little trick is tame in comparison to the climbing he has been doing of late. Before he could walk he could climb up and stand in the middle of the dining room table. He can climb up and along the back of the couch and up onto the piano. Climbing onto the girls little table is a piece of cake and last night he managed to climb onto the kitchen bench – aided by one of the small chairs the girls stand on to help me cook, and an open cupboard… at least I think that’s how he did it.

Our house is just not built for ease of supervision of children – you’ve probably already heard me use that excuse when I’ve blogged about the Twinadoes many adventures into mayhem…. and for ease keeping check on a climbing baby it is horrible. So I am wondering what will come first, A) Muski growing out of the climbing phase now that he can walk, B) Muski breaking a bone or doing some other major injury or C) the renovations being done so I can see disaster before it happens? I’m hoping for A but suspect it is much more likely to be B and just about impossible for it to be C.