Yep we are still here… almost totally spot free but housebound till the infectious period is over, and still none the wiser as to what the girls have had!

But at least I got to go out of the house today. I was supposed to go to a dentist appointment this morning for a filling… Yeeuuchh! But they called bright and early this morning to say they had to cancel as my dentist was sick! woohoo!!! I mean, bugger… poor dentist and it really only put off the filling for a few weeks, but still… it made the day look a lot brighter!

Then I decided that since Si was supposed to look after the girls while I went to the dentist he could look after them while I went out! So I did a quick trip up to highpoint.. go $60 of the $100 back that it cost me to take the girls to the doctors last Friday and returned two things to target and bought two more! But that was it really. I wandered around a lot, feeling totally uninspired and very out of place.

Funny really as I used to go to Highpoint at least once a week when we lived near by and the girls were little, just for something to do. I guess I felt a bit odd being there without them… and I dunno… Window shopping and people spotting has kinda lost it’s appeal at the moment….

Anyway I got to recharge a bit this morning regardless and that was good.

Today also saw the results come out for the first round of SURVIVOR! at DID.. well actually it was very late last night or early this morning, or sometime as I still can’t get my head around the time differences! But anyway… I had immunity so couldn’t be voted out but was hanging to find out who had been voted off my team and the others and was SUPER relieved to see that my fellow awesome Aussies, Lis and Sharon are still in the game!

So I whipped off a quick SMS to Lis to give her something to read when she came out of surgery (hope you are doing ok Lis.. thinking of you and missing my #1 stalker today!) then had a think about Challenge number 2! The challenge was to use only the following in a lay out – 1 photo, 2 papers, 1 element and 1 font. Took me a while to get my head around it but here is what I came up with! 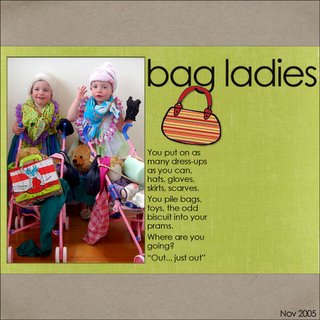 Credits – background paper by me, green paper by Holly McCaig
from her Sunroom Kit, Bag hand drawn by me and filled with
more paper from Holly’s sunroom kit, font century gothic.
This round they have changed the way you vote… you now need to register for the forums at Doitdigee and then go to this post here and vote in the poll… just to keep you on your toes. But don’t just got and vote for me because you love me (ha ha ha).

I feel a bit conceited just saying ‘hey vote for me’ and really it doesn’t mean anything then. So PLEASE please look in the gallery here and vote for the LO you like the best… wait until Friday or so when most everyone’s LOs will be up and then choose the one you like best, then vote!

Same goes for the immunity challenge though I haven’t done my entry for that yet… it is a sketch challenge and I suck at those….

Anyway that’s all for now… bed is calling!