Have you ever had a moment when you don’t recognise your child? Just for a second? When they look at you with a face that suddenly seems new, strange, unknown?

This happens to me every now and then. This person who you know so intimately, who is almost part of you. You were sure you knew every inch of them, every look, every word, every face, then they show you something new. It is almost as if I catch a glimpse of something, someone, that I almost recognise, but I just can’t quite put my finger on who or why.

When I look into Muski’s eyes I see my own eyes, but when he is asleep he is a whole different person and suddenly, last night, I saw his Grampy in his closed eyes and calm face. Most of the time Izzy is crazy and wild and nutty and says silly things and giggles a lot, but sometimes she gets all serious and deep and meaningful – where does that come from? With Zoe it is a look… a look that I think belongs on her 18 year old aunt’s face not with her four year old gappy smile. As quickly as it came it goes again and she is back to the same old nutty kid she always was.

I guess it is a part of my children growing and changing. It’s exciting and scary all at the same time. 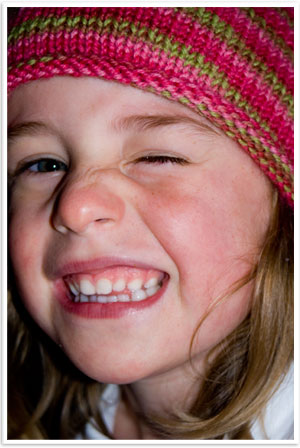 So if you guessed Izzy in my impromptu ‘guess the twinado’ competition (which, by the way, there is no prize for – sorry about that!) you were right. I have to admit I am very curious to know how people made their decisions! Many of you alluded to the fact that you had some clue that told you it was one or the other which I found interesting. Interesting because that photo is
largely clueless.

Unlike the image above there is no teeth to count – that is the easiest way to tell them apart these days, since Zoe has ‘the gap’ as we affectionately call it. The hat is not an effective clue either – yes it is pink, but it is also green, and those of you who know where the hat came from (knitted by the very talented Sif) know that we have two hats knitted from the same wool – one with one point and the other with two, but you can’t see the points in that image either!

I know who it is because, of course, I took the photo. I remember who was being the silly one that day. I also recognise the hands, the remnants of pink nail polish is the final give-away. But I want to know who those who picked correctly picked it…. unless it was a random guess.. after all you have a 50% chance of being right either way!