The moon was full last night.

Huge and round and low and creamy coloured when I got up at around 2am. I was restless, tossing and turning and waking up a lot. Each time I woke up I was sure it would be because the Man was getting up to go to work, but it never was and I felt like the night would never end. 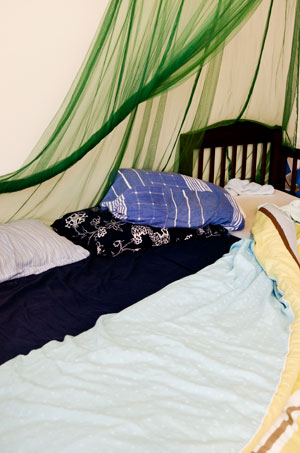 It did end, eventually.

As usual I finally fell into a deep sleep in the hours before dawn. So deep, in fact, that I slept through the Man getting up to go to work and woke from a fuzzy sleep to the sound of footsteps.

A small girl was still whining about the fact that Daddy had only read her one story and not two the night before. She slipped into the space where her Daddy had been, put her cold feet on me, had one last whinge then fell back to sleep.

On the other side of me, the the small boy was still asleep, a small miracle. So I crept back into sleep myself for a little while.

The next time I woke it was to the sound of the other small girl. She had come searching. Not for me, or for another story but for her sister.

The small girl in bed beside me stirred and told her sister to go away.

The small boy woke and sought an arm to wrap himself in as he snuggled into me.

A one sided argument ensued about how Izzy needed to get up and play. Then a tussle broke out as the player gave in to the lure of the bed and jockeyed for the coveted middle position. She won her position but lost the pillow war and as she tried to wriggle her head onto the corner of my pillow she whispered in my ear…

The exact same thing I had whispered in her ear as she fell asleep about ten hours earlier.

I didn’t want to get up, and neither did the trio of small bodies in my bed. I lay there in the best position of all…

Two small girls on one side, with skinny poking-out ribs, cold feet and giggles. One small boy on the other side with snuggles and squishes and curls that get up your nose as he tries to get closer to you.

The full moon had gone, sunlight peeked in through the blinds and the day stretched ahead with nothing urgent to do.

The loveliest of lovely ways to start a day.