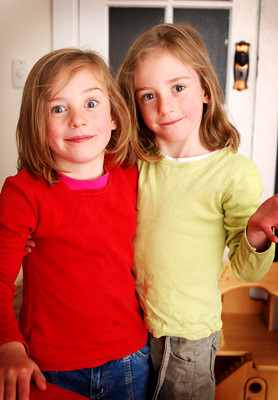 It’s not something I’ve blogged much about, partly because this journey has not always been easy for us, but mostly to give the girls some time to just enjoy what they are doing now, without the whole world focussing on what they will or won’t be doing next year. But now that the school year is over and this year’s kinder is all but done, now that the decision has been made and we are all happy and content that we made the right one, now that it is all settled I feel ok with shouting it to the world… The girls will not be going to school next year.

This year has been very up and down when it came to the girls and kinder (preschool). For the most part they have loved going to kinder and they have grown up in so many ways, but I would be lying if I said it was all a bed of roses. They have taken almost the whole year to settle in to being part of a group. They have had a really hard time making friends and coping with the social world of kinder. They both struggle with one or two little things and don’t cope well with set backs. They are still stuck together with glue and don’t cope well without the other one there to support them. None of these things are so terrible, none of them mean that they really couldn’t have gone to school, but when their teacher offered up the idea of a second year of kinder we decided that if we could get the funding we would take it.

I will admit that I struggled early on with making this decision. I’d come to the point where I’d almost forgotten how much of a struggle it was with the girls in their first year. I had pretty much been able to put all that prem baby stuff behind us. It was no longer something always haunting us, we were no longer always worrying about long term effects or looking for problems. There are a lot less people pointing to them on the street and exclaiming about them being twins and I thought we’d got to that point where they were really just like any other kids… Then all this came to a head and I was right back in that place of worry and wondering and hurting for them being ‘different’.

Maybe they are just generally shy kids, is that so terrible? Does everyone have to be out going and overly sociable and have heaps of friends? Maybe they’ll always need each other. Maybe they will be those kind of freaky identical twins who marry other identical twins and live next door to each other because they can’t bear to be apart? Is that so terrible? I am not a twin, I have no idea what their bond is like, how can I pass judgement on that? Twins are different, their bond is different… is that necessarily bad?

Ok sure, I had hoped that the tantrums and outburst might have lessened a bit by now too. And sure I know that some of their crazy fears and idiosyncrasies were not doing them any favours. But I also know how stubborn they both are, how if they don’t want to do something they are not going to do it… no matter what… and how if you dig your heels in they will dig a hundred times deeper and they can scream louder and hold out longer than anyone I have ever met. As much as it drives me nuts every day, I can quietly admit that I like the fact that my girls have some spunk, that they stand their ground.

I can see how all of these things were not helping them easily be part of the group at kinder and how they could possibly make school just that little bit harder. I am not so sure that they are all negatives in the big scheme of things, but I can see how right now, they are making things a little difficult sometimes.

What clinched it though was merely the fact that another year of kinder could only be good, whereas sending them to school if they were even a little bit not ready had the potential to be really bad. In my mind there are very few negatives to another year of kinder. Another year of being home more than ‘at school’. Another year with more time for them to play in the sand pit, make mud pies, roam around outside. Another year of fun, hands on play and learning…. it kind of seems like a non-contest when you look at it that way.

I am not anti school. Every now and then I toy with the idea of home-schooling but the girls will most likely be going to a mainstream, all be it small and ‘progressive’, local state school when the time comes. But I also tend to believe that once kids start school they loose so much time to simply be kids, to follow their own paths, ideas and dreams and they begin to be expected to learn things that adults think are important and in ways adults want them to…. and I am not so much a fan of that, especially not for little kids.

So far the girls are not too bothered by the fact that their kinder friends are all going off to school and they aren’t. They wouldn’t have gone to school with anyone from kinder anyway, and it helps that we know several other kids who will either be home schooled, or who will start kinder a year later etc. They are very excited to start at their new kinder (one closer to the school they will go to) after a visit to discover they have budgies and chooks and all kinds of cool things. They seem to accept without bother when I tell them they will go to school when they are six and that everyone does what they need to do when they are ready to do it. Even with every man and his dog assuming they will go to school (and I understand that assumption, I am sure I have made it myself on many occasions) they don’t seem rattled, they simply reply ‘not next year, we are going to new kinder next year’, and for me that really clinches the deal… they are happy so we are happy.

I’ve lost some sleep over this, I am quite sure that we’ve made the right decision. The Twinadoes will do a second year of four year old kinder next year and we are so looking forward to

Home » To School or not to School…