Ok been doing a few challenges at various places…. thought I’d share the last two I did for the ‘It’s a Chick’s Life, Scrap it’ thingy at the Digichick….

This one is a quick over view of last year… which actually was a bloody big year for us now that I look back! 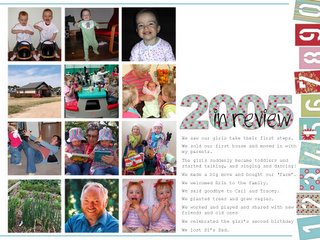 credits – numbers are by Holly McCaig and the
2005 is made from a shabby princess paper that I recloured to match.
And this one is a ‘new years resolution’ thing though ‘intentions’ seem to be the catch word of the moment in scrapping circles! I guess I decided to be a bit silly with this one, but in actual fact every one of those intentions does have a hidden important meaning… take the first one… ‘have more ‘lati parties’ one very special person in particular will know that I am talking only about her and how much we miss her! 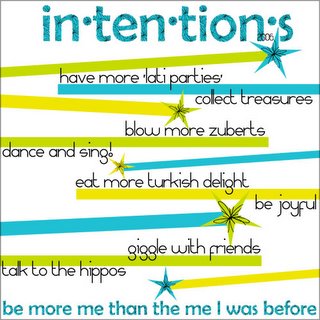 And in other news….

We spent that very nice hot Sunday at my parents place… because it is slightly cooler than here, because it meant we didn’t wake up Si between night sifts and mostly because it meant someone else would help me look after the girls.

We have had a few VERY rough nights with sleep of late… and Saturday night was a doozy! Between the two of them I don’t think I got more than 2 hours sleep and that wasn’t all in one hit. I guess the hot nights have been a bit hard on them, plus Si going back to work and then nights and well we are just in a bad patch which we have some times. They always pass, and we always seem to survive… just right now, in the middle of it all, I am not feeling so confident of either of those things.

It doesn’t help that I am not sleeping very well either and that I generally feel like crap…. think I might need to take better care of myself and stop burning the candle at both ends. But it feels like a bit of a vicious circle when I can’t sleep because I feel crap, then when I do finally sleep I have to get up to the girls and then I haven’t had enough sleep so feel more crap! And I have soooo many things I need to do!

Izzy has also decided she definitely has to ‘sleep there’ – which, translated, means she wants to sleep in the single bed which is currently between the cots so I can come feed them there or sleep there if needed when Si needs an unbroken nights (or day’s) sleep. I am not sure any of us, including Izzy, are really ready for her to ‘sleep there’ but she is adamant and it is the ONLY way I can get her to go to sleep. It does prove a bit of a problem though when Zoe decides she has to ‘sleep there’ as well… so I think the purchase of two big beds needs to happen and fast.

So we went for a quick look with my Mum today. Oh wow do you know how expensive single beds are!?!?!! And how fancy and kitchy they all are!?!?! I want something fairly plain and timeless… something that will work ok as the girls grow up… but they are all fancy or swirly or soooo BIG and chunky that we’d never fit two in their room! And ugh… nothing under about the $300 mark… EACH! I am so disheartened about the whole thing I want to give up already! 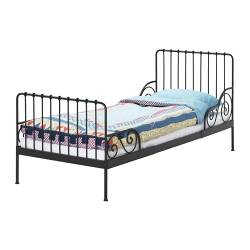 I did find at ikea online this bed that I really like… and it’s only $169! But it is an extendable toddler bed, which is ok as it extends to a full size single… but you have to buy extra bits to complete it so I am not sure exactly how much that will all cost in the end. But still it is the nicest bed I’ve seen so far, and I am sort of running out of places to look. Anyone got any ideas?

Looks like my ‘day with the family doing something nice for my birthday’ on Wednesday might end up involving going to ikea to look at beds! But then if that solves our current sleep problems then I guess I can live with that.

I so badly need some sleep…. and I thought I would have crashed totally by now. Yes I know it is only 10:30, still early for me but I have had two phenergans and am waiting for it to hit. I haven’t figured out what is causing it, but for the past two weeks I have been getting progressively itchier! It started with my eyes and now they are permanently puffy and my eye lids are red and rashy and now it’s my arms and hands… and it’s driving me NUTS! There is NOTHING worse than being itchey! So since the girls dermaid cream isn’t doing a thing I made an executive decision and waited till after Zoe had her feed tonight and took the drugs. I am going to have to put the girls off for a feed in the morning I think… though if they really want one I will just do it. I know they give phenergan to kids so I figure the small dose they might get 12 hours after I took it will be worth it if it stops me itching! Plus you never know it might help me sleep… though there is that other great side effect of antihistamines.. ‘paradoxical restlessness’… just my luck!

Keep the chicken names coming… they make me smile!

Home » Trying to get back in the swing of things