The sun was hot today and the wind blowing a gale but the girls found their new bathers and decided they wanted to go to the beach! Sadly that was not on the cards for today, but we did the next best thing and set up the paddling pool right next to the sand pit to see if we couldn’t squeeze out the last few drops of summer before Autumn really sets in. 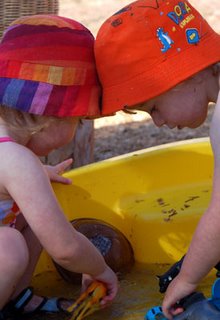 The girls had a lovely time splashing about in their ‘two for the price of one’ bathers (you gotta love those kind of bargains when you are the mother of twins!) which are about three sizes too big in the hope of fitting next summer! Despite being big they are very cute… ruffles on the bum and all, and the girls love them. They dumped every outside toy we have into the water, along with half the new tan bark from under the swings and a good handful of leaves and grass (food for the animals you know!) with a dash or two of sand for good measure and had a ball! 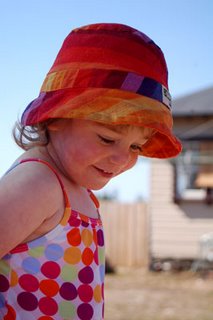 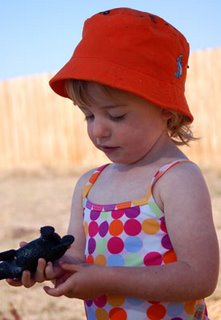 Zoe is starting to get it together with regards to the potty and the toilet… asked for both today and produced output each time, very impressive!

Izzy on the other hand… still thinks the phantom wee’er is making puddles at her feet. She also wants to sit on the toilet but that is much more about the toilet paper and the excitement that ensues between her and her sister while they jockey for position, than actually doing anything! She still refuses to wear a nappy most of the time when we are at home, and wee’ed on the couch four times today! ARRGGGHHHH!!!

We are going to buy some undies tomorrow.. not because I think either of them are actually really ready for undies, but because I thought I might be able to tempt Izzy to keep her nappy on for a while by putting the undies over the top! Please let it work.. before I have to through out my couch as well as the rug.. thank goodness we don’t have carpet!

Home » Trying to squeeze out the last drops of summer…