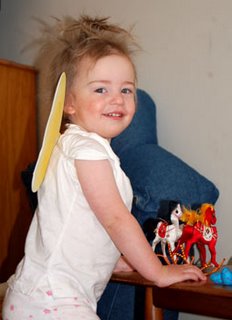 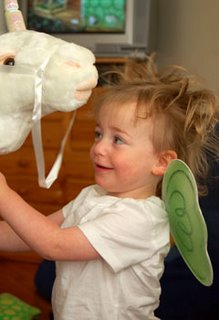 The girls are soooooo lucky to have so many people who love them and who spoil them rotten! This round of pressies were from ‘the aunts’ as well as Uncle Jo and Julia and Maree and Great Nan… and wow did they get some good loot!

The Baldy Boy and I were of course thrilled to get our zoo membership renewed and the girls will be just as pleased when we go for another visit next week. Plus we got some yummies and I got some cool herbs.. yipee!

The fairy wings had to go on straight away and I only just convinced them to take them off for their sleep! The dolls are gorgeous, the chrissy decos have been kissed a thousand times and the hobby horses WOW!!!!

The play dough however…. while being a BIG hit caused some issues! Both girls had a HUGE tanti because they had to get it out of the box right then and there…. I was not keen (I know I know party pooper!) but Baldy Boy eventually gave in, as they have him wrapped around his little finger so they got it all out and sat and played for a while. They LOVE play dough so this was a big hit gift… until, that is, Baldy Boyi made the little walking play dough bear. The kit came with a mould and little wind up feet that you stick into the mould to make the bear walk… very cute… but VERY scary if you are Zoe! She was fascinated by it but totally freaked out if it started walking in her direction! And of course being the wonderful mother that I am I had to point it in her direction at least once so I could take a photo! 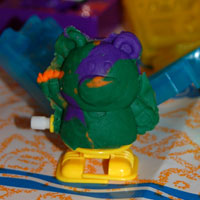 So after all that excitement I left the three of them playing play dough and went back to bed to watch from a distance and laugh alot as Baldy Boy tried out every playdough tool and trick in the kits! Ahhh I am married to such a big kid… a wonderful, amazing, awesome big kid, but still just a big kid!

Mind you I am very proud of that third child of mine… he did such an awesome job at his Dad’s funeral yesterday. He spoke so well and I have never been more proud or more in love in my whole life.

Home » Will the presents never end?