It’s sort of odd saying that we live ‘in the country’ or in a ‘rural area’ because well.. while we do technically live in a rural area (ie it is outside metropolitan Melbourne and we have an STD phone number) we are actually closer to Melbourne CBD than a lot of suburbs are. So while yes one of our neighbors is a heard of cows and our fences are made of post and wire and I have views of the Macedon Ranges, mostly it just doesn’t ‘feel’ like we moved away from the city because we don’t seem far enough away from anything!

But you really know you live in the country when instead of stray dogs wandering in to your yard you get stray horses! 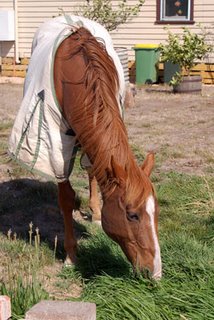 Yesterday morning I had taken my two VERY cranky children out the back to let the chickens out while my equally cranky husband went to pick up our friend from the train station. Izzy howled the whole 5 minutes it took me to open the gate, check if there was an egg (yes ‘egg’ singular, as those damn small hens are STILL not laying!) and let the chooks out then suddenly stopped and said ‘look at the horseys’. So I look up expecting to see horses in the neighbors paddock, and I saw horses all right.. but in our vegie garden, two of them!

I am not sure who got more of a fright me or them but they certainly left my vegie garden in a hurry and headed around the front. I dumped the girls inside and ran for the front gate, hoping I could beat the horses, shut the gate and at least keep them safe on our property until we could figure out where they had come from. After exhausting myself with a run down the drive (yes I am unfit but hey we have a looooong drive!) I realised I didn’t need to rush as the horses had found the green grass growing around the bore water tank and were happily gorging themselves and would probably never leave!

So anyway with the gate safely closed I called Si and told him to stop by our back neighbors on his way home to see if they were missing some horses… thinking that a back fence must be down. After showing the girls the horses I wandered up the back of the paddock to see if I could see where they had come in, but all the fences were fine, and it seemed like they had come in our front gate. Sure enough Si calls to say they don’t belong to the horse stud behind us and he was stopping at another neighbor’s who has horses to see if they had any ideas. He came home still with no clues as to where they had come from but at least the word was out now and they were safe.

They were both very friendly, came right up to you when you walked near by and happily ate from your hand and were very pleased to see a bucker of water each. The girls thought they were great, until one of them snorted and they both decided they’d rather look from a distance!

I was a bit worried that being the Thursday before the long weekend that whoever they belonged to might have gone away for Easter and we could be stuck with them until Tuesday… a disaster since we have no clue how to look after horses, let alone safe fencing or food! But thankfully come 5ish their owners turned up… someone from our street who had come home from work/school and searched an hour for the horses until finally asking the other neighbors. Needless to say they were very grateful we had kept them safe as they said recently someone else’s horse had gotten loose and ended up in a car accident up on the main road!

So that was out excitement for the day but I have had to wait until now for the batteries in the camera to charge so I could download the photos!. In other news….

That is the only other news there is and I wish it would go away already.

Home » You know you live in the country when….