In case you hadn’t figured it out yet, our girls are identical twins. They are very similar in so many ways (except that now Zoe has three front teeth missing) and they are VERY close. They are four and a half years old and up until now they have barely been apart, and almost never by choice. 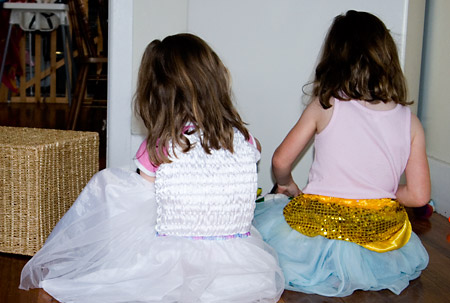 They were close even before they were born, sharing a placenta and an outer sack with only the thinnest of membranes separating them while I was pregnant. They were born within seconds of each other (we had severe TTTS so they needed to be delivered almost simultaneously to stop further damage) and although they were in isolettes for 7 weeks they were always side by side (except for a brief period when Izzy was moved to special care and Zoe was still in NICU – but then our paediatrician arrived and made sure they were put back together as Zoe had gotten noticeably worse since Izzy had been moved!).

As little babies they slept together in the same cot, then side by side in their own cots. Often we’d find them squished up each end of their cots touching fingers through the bars and when they were bigger they’d climb out and sleep together now and then. These days they share a room, but don’t often share a bed for the whole night – apparently Izzy snores and Zoe kicks in her sleep- so they only share for book reading and whispering and giggling.

Now as preschoolers they have what I’d call a love-hate relationship – they fight and fight and fight and fight some days, but within a millisecond they are back being best friends again. They often demand to wear the exact same outfits, or fight over who gets to wear what clothes. They both complain bitterly about the injustices performed by the other, but fall to pieces at the thought of being ‘alone’. Last year when Zoe was hospitalised with asthma Izzy fell apart. She was surrounded by love, in familiar surroundings with people she knew, but when she was away from her sister she simply didn’t cope.

I decided early on that I would never force my twins to be ‘apart’, to do things on their own. I would never force them to be in separate classes at school, or to choose separate interests or hobbies. In my mind, there are a lot of not so great things about being a twin but the one really wonderful thing is that you will always have your twin, you will always have someone that knows you better than anyone else in the whole world, so the idea of making them be apart seemed wrong to me. I always thought that one day they would start going their separate ways now and then, of their own accord.

I still maintain that stance. I still won’t put them in separate classes at school unless they ask to be, and I won’t ever force them to be apart if they don’t want to… but we have now come to a point where we feel we need to start encouraging them to be a little more separate.

Before the hospitalisation incident I could see signs of them beginning to separate from each other a little more, but since then all the signs have vanished and they have gone from being simply ‘close’ to being some what ‘co-dependant’. If one cries, the other cries. If one wants a cuddle, the other has to have a cuddle…. these things are all fine and normal, but we went through this when they were toddlers, and came out the other side until the hospital separation caused a giant leap backwards. Back then I agonised over this same issue of separation, but back then we just had a wait and see attitude… but we’ve waited and we’ve seen now.

These days I am beginning to feel that being ‘close’ and ‘always together’ is hindering them a little… their social development is struggling, joining in with a group is harder, making their way in the outside world seems to demand that they are able to separate every now and then. Part of me wants to fight the ‘outside world’ and tell them all to ‘get used to it, they came as a pair, they stay as a pair’…. but part of me can also see that this is the logical next step for them to mature and to be able to join in and do things that I am sure they would enjoy.

So here we are, four and half years down the track from when this matching pair came into our lives and we have begun to gently encourage them to be apart… just every now and then, for a little while.

Thankfully for me, my fears and uncertainty have been blown out of the water by the girl’s responses. I was worried they would simply blanket ban any suggestion of one going with Daddy and one going with me, but they have actually taken to it without any fuss at all! So far we haven’t been pushing too hard, just taking baby steps and making sure everyone is happy with the status quo and doing something fun. So far being a little but apart and a whole lot together has helped with the fighting, the general whiney behaviour and their confidence at kinder and in a large group… so hopefully it is onwards, upwards and together-apartness from here on in!

Home » A Little Bit Apart and a Whole Lot Together…