At the shops with the girls someone asked me ‘The Question’…
“Are they twins?”

Lets ignore the fact that the girls are now well old enough to be addressed personally and answer that question themselves. Lets jump right to the next question…
“Are they identical?”

Harmless curiosity, while sometimes annoying, I know most people mean well and I can smile and answer both those questions with a polite ‘yes’….

That is until they ask the next question.
“Are you sure they are identical??”

We get this a lot, so much in fact that I’ve written several articles about it for different publications, but I thought I’d share the information here too… 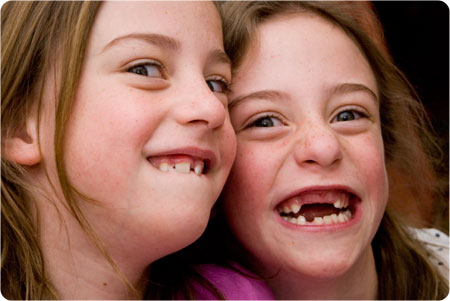 I have identical twin girls, and yes I am sure they are identical… and here’s how I know.

During the an early specialist scan a number of things were found to make us think our babies might be identical.

* They appeared to have one ‘outer sack’ with only a thin membrane separating them.

* We had Twin to Twin Transfusion Syndrome.

Twin to Twin Transfusion Syndrome (TTTS) is a complication where the babies don’t share the placenta equally. It only occurs in identical twins who share a placenta.

* They look the same…

While I’ve always been able to tell them apart (even though I was scared I wouldn’t be able to before they were born), from the very beginning they looked the same, despite the differences caused by the TTTS. As they’ve grown older they’ve gotten more alike, of course they are not totally identical in appearance but they are very similar.

* They’ve had a DNA test that confirms it!

Of course the only way to know for sure is with DNA fingerprinting. As part of a research study we take part in, the girls were tested when they were babies. DNA samples are collected either from blood (usually a finger prick) or cheek cells and sent away to the lab… the results came back that our girls are 98.9% genetically identical. Aboust as identical as you can get without being a conjoined twin.

But you know… without all the fancy testing and technical talk I think most parents of twins, triplets or more have a pretty good idea if their children are identical or fraternal. I see so many differences between my girls, but I also see how incredibly alike they are. I see how often even people who are close to us mix them up. Without any testing, if you feel that your children are identical… then they probably are. And if you ask someone if their twins are identical, please accept their answer and smile and move on.

Home » Are They Identical Twins?