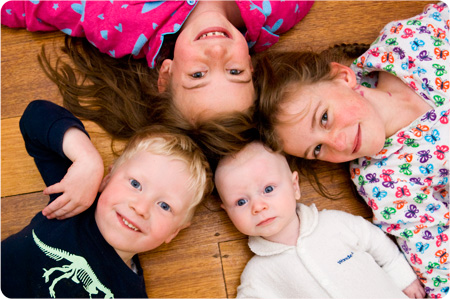 The days would start out ok, but then I’d be left dazed and disoriented, pondering with amazement at how quickly things turned from ‘all good’ to ‘off to hell in a hand basket’.

It seems we all went insane at the same time.

The Big Girls decided that it would be perfectly ok to have a water fight, upstairs, at their grandparents’ house. A few days later there was an incident involving yoghurt, finger painting and windows, and then one which resulted in a favourite piece of clothing being shredded, and so it went on.

The Middle Child has been practising his left hook and has taken to throwing things, like apples, cups of water, pencils and poopey nappies.

The baby has been busy perfecting his projectile vomiting skills. He has suddenly decided that sleeping is not for him any more and there is a vague possibility that teeth might be some where on the horizon. (Now I’ve said that, he’ll still be toothless and chewing my nipples off when he’s one I’m sure.)

The Father Figure has been off financing his bike fetish and spending a good deal of time appeasing the goddess of wifeliness by ordering various major structures for the renovations – so for the most part it has just been me and the ferals.

And Me?
Well I’ve been doing my narna a lot, loosing the plot often, and going totally insane. I’ve become the kind of mother who parents with ever increasing outbursts of yelling, a fair bit of whinging (almost as much as the girls do), and continuous idle threats that we all know I am not going to follow through on. When I am not using those fabulous parenting tools I am using the even better skill of ignoring everyone and everything till I can’t possibly ignore them any more, and then blowing my stack.

Yep, life’s darn good down on the farm, y’all.

Obviously something had to give.

By Friday I’d made some executive decisions.
I had a little review of what was reasonable to expect in terms of behaviour for each age of our kids. I decided that the girls would stay home from school on Monday (Tuesday is a public holiday here), and that for the first part of the weekend we’d make no plans.

You see I have a theory….

So this weekend we all tried to ‘be wonderful’.

For the kids, ‘being wonderful’ meant speaking nicely to everyone, looking after our home and our things, being gentle, listening to each other, talking about problems and asking for help.

For me, ‘being wonderful’ meant speaking nicely (not yelling or lecturing), being present and/or coming as soon as I can when asked, providing lots of good food and water, saying yes if at all possible and joining in.

If things got a little out of hand or someone forgot to speak nicely, instead of threatening or yelling, I simply said “remember to be wonderful.” Those few words were enough to remind whoever it was to stop and re-think, even if that someone was me.

Sometimes things still ended up down the toilet, but more often than not ‘being wonderful’ was enough to keep us all on the straight and narrow.

So the first half of our long weekend has not been perfect but it has been better, so much better. And considering it’s been me and the picklebums stuck inside while it has rained and rain, I’m more than happy with ‘better’. Hopefully the rest of the weekend and life in general will continue to be a little more ‘wonderful’ from here on in…. well, at least until the next time things turn feral, because there is always a little feral on the horizon around here!